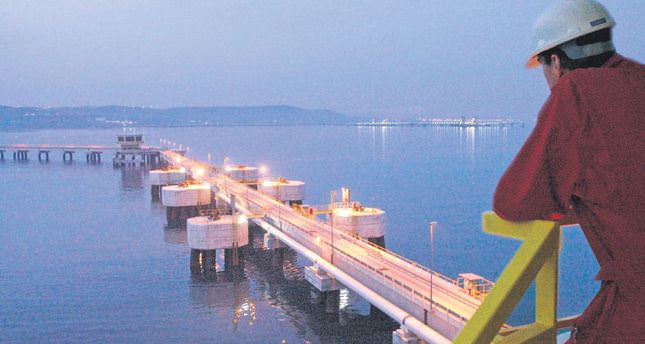 Ceaseless efforts by Turkey ensure that oil piped from the KRG is reaching world markets, with the revenue to be deposited in Halkbank

ANKARA — The first shipment of oil piped from northern Iraq was sold to European markets on Thursday and the revenue will be deposited in Turkey's state-run Halkbank, the Kurdish Regional Government (KRG) said in a statement on Friday. The autonomous region said sales from the Turkish port of Ceyhan would continue despite opposition from the federal government in Baghdad, which has threatened legal action against any company involved in "smuggling" Iraqi oil. The oil exports were expected to begin months ago.

The first shipment of oil piped from northern Iraq was sold to European markets on Thursday and the revenue will be deposited in Turkey's state-run Halkbank, the Kurdish Regional Government (KRG) said in a statement on Friday. The autonomous region said sales from the Turkish port of Ceyhan would continue despite opposition from the federal government in Baghdad, which has threatened legal action against any company involved in "smuggling" Iraqi oil.

The oil exports were expected to begin months ago. However, Baghdad and Irbil clashed over how to handle oil revenues and the KRG's legal liabilities regarding oil exports.

After Turkey's proactive shuttle diplomacy, both sides reached a tentative agreement. "A tanker loaded with over 1 million barrels of crude oil departed last night from Ceyhan toward Europe," read a statement from the KRG. "This is the first of many such sales of oil exported through the newly constructed pipeline in the Iraq's Kurdish region." The statement added that oil revenue would be treated as part of the region's share of the Iraqi national budget, which Baghdad has partially withheld since the start of the year as punishment for the Kurds' moves to export crude independently. The KRG said it remained open to negotiations with Baghdad and would comply with U.N. obligations by setting aside 5 percent of the revenue in a separate account for reparations for Iraq's invasion of Kuwait in 1990. Turkish Energy Minister Taner Yıldız said on Friday that the first cargo was sold to the Mediterranean spot crude market. "This crude oil will possibly go to Italy or Germany," Yıldız said in comments broadcast live on TRT television, adding that the cargo totalled about 1 million barrels. Yıldız told reporters that shipments of Iraqi oil from Turkey's Mediterranean port of Ceyhan began Thursday evening. "It's Iraq that makes sales and possesses the oil and it's again Iraq that will govern future sales," said Yıldız.

Iraq has some of the world's largest deposits of oil and gas, and the central government in Baghdad insists it has the sole right to develop and export the country's natural resources.

Since the U.S.-led invasion in 2003, Baghdad has been at loggerheads with the energy-rich autonomous northern Kurdish region, which has sought to sign deals with foreign firms and export without the consent of the central government. The exports through Turkey could raise tensions between the Kurds and Baghdad after the April 30 elections in which the country's Shiite Prime Minister Nouri al-
Maliki emerged the biggest winner. The U.S. voiced concerns on Thursday that the move could destabilize Iraq. "Our position has long been that we don't support exports without the appropriate approval of the federal Iraqi government, and certainly we do have concerns about the impact of those continuing," U.S. State Department spokeswoman Jen Psaki told a daily press briefing in Washington. "Our most immediate concern is for Iraq's stability.

Iraq is facing a difficult situation. We've been clear that it's important for all sides to take actions to help the country pull together and avoid actions that might further exacerbate divisions and tensions," she said.

The latest development also risks harming Ankara's relations with Baghdad. Last year, Turkey offered to serve as an independent intermediary by having Iraq's oil revenue deposited into an escrow account at a Turkish state bank. In the past Turkey refused to establish official contacts with Iraqi Kurds, fearing the establishment of a Kurdish state there could embolden its own Kurdish minority, which had waged a long separatist campaign.

But as Turkey's economy has boomed, and its thirst for energy grown, Prime Minister Recep Tayyip Erdoğan's government has moved to forge ties with Iraqi Kurds. Erdoğan has even referred to the autonomous region in northern Iraq as "Kurdistan," a word that has long been a taboo among politicians in Turkey.

The biggest problem in the ongoing negotiations among Turkey, northern Iraq, the U.S. and Baghdad government was the problem of designating a bank to deposit the petroleum revenues. The Iraqi central government and the U.S. wanted the yield to be deposited into the bank account opened by JP Morgan for the U.N. Development Fund for Iraq. However, Turkish authorities objected, "This is what Baghdad requests. We want Halkbank or another Turkish bank in service." Eventually, Turkey's demands were answered. Those authorities also highlighted that the process will progress in compliance with international law and in a transparent manner. It was also announced that parties were informed about the processes. Turkey and northern Iraq officially invited the Baghdad government to monitor and track the process.

On Friday, according to local media, Iraqi authorities took legal action against Turkey for facilitating autonomous oil exports by the Kurdistan Regional Government (KRG) without Baghdad's approval. In a statement given to Iraq Oil Report on Friday, the ministry claims Turkey's transportation, storing and loading of Kurdish crude oil over the past five months violates the treaty that governs the Iraq-Turkey Pipeline (ITP). The ministry has filed a request for arbitration at the International Chamber of Commerce in Paris against Turkey.
In an answer to Baghdad's latest statement , a senior official at Turkey's Ministry of Energy told Daily Sabah that Turkey is not in violation of international law on this matter. "Turkey will continue to export Kurdish oil," said the official.
Last Update: May 24, 2014 1:28 am
RELATED TOPICS