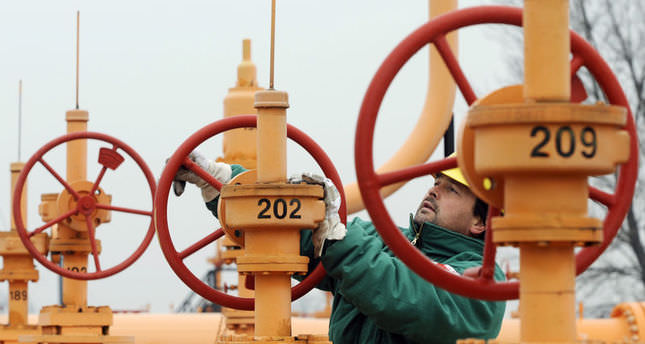 by AA May 28, 2014 12:00 am
ANKARA — Move towards renewable and alternative energy sources amid fallout with Russia points to decline of gas use, hydrocarbons expert says.

Europe's "Golden Age" of natural gas is coming to an end and it is turning towards other energy sources, Dr Sohbet Karbuz, director of hydrocarbons at the Paris-based Mediterranean Observatory for Energy, has said.

Karbuz told AA in an exclusive interview on Wednesday that long-term natural gas agreements between Russia and EU countries were based on a take-or-pay commitment, meaning countries agree to purchase a set volume over 30 years and pay for it in the event that they break the agreement.

He said: "The cancellation of these contracts, or a serious revision on the agreed gas quantities, is not possible."

But Karbuz explained that Europe is looking towards renewable and alternative energy resources for its needs once the deals come to an end.

"An excessive amount of support for renewable energy is killing the gas sector. Europe has begun to lean towards coal," he said.

Although the EU is currently looking to reduce its reliance on Russian gas, it still remains Russia's largest energy market, having bought more than 160 billion cubic meters of gas in 2013.

Pointing out that the EU commission is trying to prepare a new energy strategy, Karbuz said each country thinks for itself: "There is no unity among the countries."

"While France says, 'I will keep using nuclear power,' Germany says, 'Coal is cheaper now,' and starts to use coal," Karbuz said, adding that, "I summarize Europe's energy strategy as; Do as Europe says, don't do as Europe does."

Asked whether Russia would cut gas supplies to Ukraine, as it did in 2006 and 2009, Karbuz said: "It is very likely under the circumstances."

Russia accused Ukraine of illegally importing its gas in 2006 and 2009 and stopped supplies.

Last month, Russia threatened to cut off supplies unless Kiev paid its debt by 1 June.

Gazprom, the state-controlled Russian gas company, also terminated its previous agreement with the former pro-Russian government of Ukraine and increased gas prices from $286 per 1,000-cubic meters to $485 in April.

Currently, Ukraine owes $3.5 billion to Russia for its gas, according to Moscow.

"Europe can only support Ukraine with its debt to Russia until a certain point. When this support stops, major problems may occur," Karbuz said.

He underlined that Russia had foreseen the possibility of such problems and therefore begun the South Stream pipeline project, which will carry Russian gas to Europe via the Black Sea and Turkey, by-passing Ukraine.