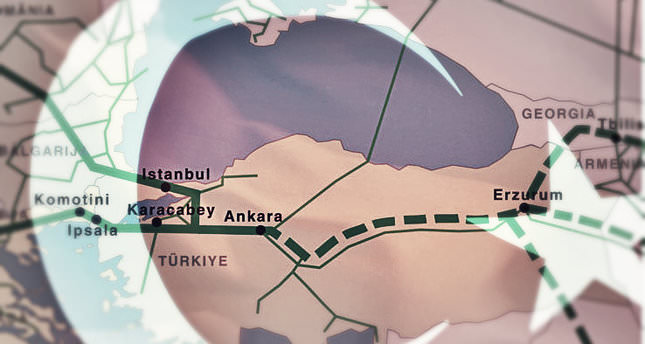 by AA May 28, 2014 12:00 am
ISTANBUL — Turkey has emerged as an alternative destination to Bulgaria and Italy for Russia's new natural gas South Stream Pipeline Project, industry and international experts have said.

The country was placed in the spotlight after Russian President Vladimir Putin recently declared Moscow would choose a country from outside the EU to head the project, following the EU's strained relations with Moscow following the annexation of Crimea by Russia.

Diverting the pipeline to Turkey would also increase pressure on Italy which, in turn, could be expected to lobby its EU partners for better relations with Russia, he said.

The South Stream project, which is expected to be operational by 2018, was designed to ship Russia's natural gas to Europe through Bulgaria, Greece, Italy and Austria.

However, Brussels has halted the project on the grounds that it would have increased reliance on Russian gas among southeastern EU countries.

Sergey Glebov, a professor of international relations from the Center for International Studies at the Odessa Mechnikov National University in Ukraine, said, "The main question [is], who will consume [and] buy this Russian gas in the EU if the EU is calling for independence from Russian gas?"

Natural gas currently flows from Russia into Turkey via the Blue Stream gas pipeline under the Black Sea.

"It looks like Turkey and Russia may expand capacity of the Blue Stream, or build a parallel pipeline along the seaside of Turkey, excluding the previous plan via Bulgaria," Glebov said.

The EU is the world's biggest energy consumer and spends nearly $800 billion (TL 1.68 trillion) on energy imports every year.
Russia exports natural gas, oil and coal to Europe, supplying 22 percent of its energy alone, according to an AA analysis of data provided by the International Energy Agency, a Paris-based autonomous intergovernmental organization.

Turkey imported about 27 billion cubic meters gas from Russia in 2013.