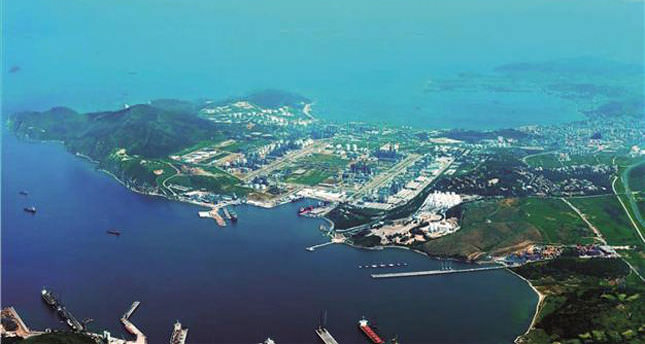 by AA May 30, 2014 12:00 am
ANKARA — SOCAR Turkey Energy Company, Azerbaijani energy giant's Turkish venture, has signed a $3.29 billion credit deal on Friday, for its STAR refinery project, Turkey's biggest refinery project with an annual crude oil processing capacity of 10 million tons.
The 23 local and international creditors - including export credit agencies, commercial banks and development banks - will provide $2.69 billion of the total credit with a 18 year term, with a grace period of the first four years. The rest of the credit, $0.6 billion, has a 15 year term again with grace period of the first four years, according to a statement from Petkim, SOCAR's petrochemical company.
The news means that the company secured a substantial amount for its complex refinery project, which required a fixed capital investment of $4.2 billion.
In 2011, SOCAR started the construction of the STAR refinery complex in Izmir on Turkey's Aegean coast. The project aims to relieve Turkey's petrochemical sector of its dependence on energy imports of petroleum products. It is projected to become operational in 2017.
SOCAR bought the shares of Turcas Petrol in March, increasing its stake in the project to 60 percent, while the remaining 40 percent belongs to Azerbaijani state.
Last Update: May 30, 2014 6:35 pm
RELATED TOPICS