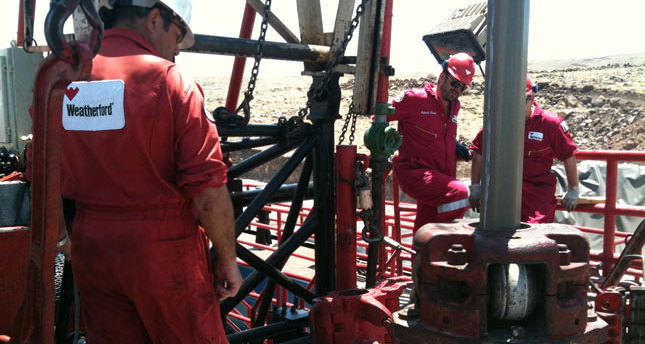 by Daily Sabah Jun 02, 2014 12:00 am
ISTANBUL — Turkish Petroleum Corporation General Manager Besim Şişman said his firm is continuously increasing its investment program, expected to reach $2.4 billion, about two-thirds of which is destined for oil fields abroad.

"Growing by acquisition is one of our new goals; we are working hard on this," Turkish Petroleum Corporation (TPAO) Deputy General Manager Besim Şişman stated on Sunday. Şişman said that while TPAO's investments in Turkey were around $90 million in 2002, the figure reached $1 billion in 2014. He added that TPAO had an investment program of $2.4 billion for next year, $700 million of which is for domestic purposes.

Şişman indicated that although there was no problem regarding investments, problems came up in the process of turning investments into production. "To solve those problems, we set some goals. In the scope of those goals, we thought TPAO should grow by acquisitions. In the 60 years of TPAO history, we became partners with a Hungarian company in Russia last year, which was an important acquisition valued at $176 million.

This acquisition was the first in the history of TPAO, and we hope it won't be the last.

In addition to stating that Turkey imported 98 percent of its gas and 90 percent to 92 percent of its oil, Şişman emphasized that Turkey is not rich in oil and gas, and TPAO was working hard to contribute more to Turkey. "A lack of hydrocarbon reserves cost Turkey $53 billion last year, which means 80 percent of Turkey's current account deficit stemmed from gas and oil imports. We believe that TPAO has great potential to narrow the deficit via new national and international investments. TPAO aims to increase its production fields abroad. We have been striving mightily to achieve this target," Şişman said.

Şişman also noted that TPAO has been undergoing a restructuring process that will enable it to act aggressively abroad. In response to allegations that the Turkish government will privatize TPAO, Şişman noted that the state encourages TPAO to make new investments, and there is no intention to privatize.

TPAO is the state-run oil and gas company of Turkey. It is based in Ankara and produces oil and gas in the Caspian region, North Africa and the Middle East. TPAO currently carries out exploration and production activities in Azerbaijan, Kazakhstan, Libya, Turkmenistan, Georgia, Iraq, Egypt, Russia and Algeria.
Last Update: Jun 02, 2014 10:25 am
RELATED TOPICS