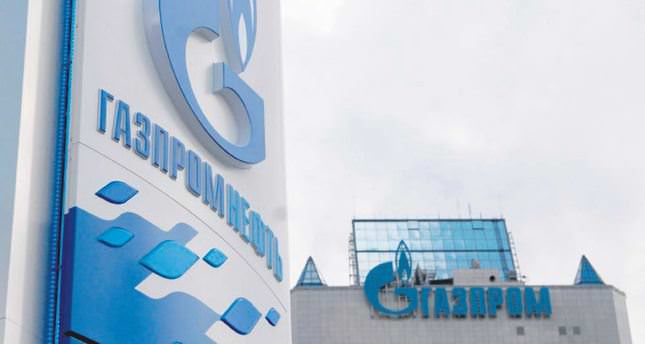 Gazprom added that the average gas price it was charging its clients in Europe, including Turkey, was $387 (TL 813) per 1,000 cubic meters last year. Gazprom, which accounts for around one-third of Europe's gas needs, said it plans to ship 56.4 bcm to Baltic States and countries in the Commonwealth of Independent States this year, down from 59.4 bcm from 2013. Ukraine is a major Russian gas transport route to Europe and any suspension of gas flow will have dire consequences down the line.

Moscow and Kiev are locked in a dispute over prices and volumes, although tensions eased on Monday when Gazprom delayed switching Ukraine to prepayment for supplies by almost one week, until June 9. Late on Monday, after some six hours of talks brokered by the EU, European Energy Commissioner Guenther Oettinger said the chief executives of Gazprom and Ukraine's Naftogaz had agreed to consider a plan that could avoid price disputes recurring over the European winter when demand peaks. Gazprom yesterday hailed progress to resolve a crisis that is threatening to cut gas supplies to Ukraine and could disrupt the flow of gas to Europe. "There's an understanding now of how to move forward.

This is probably the main result of Monday's talks," Gazprom Spokesman Sergei Kupriyanov said in Moscow. Kupriyanov stressed it is important for Ukraine to clear its $1.4 billion debt for the November and December supply as well as to start clearing the April-May debt.
Moscow has not made public the amount of Ukraine's debt for the past two months, but Gazprom CEO Alexei Miller said last week the May deliveries alone could cost about $2 billion.

EU Energy Commissioner Guenther Oettinger said on Monday that Russia and Ukraine have agreed on a proposal that would see a lower gas price for Ukraine complete with a debt repayment schedule. In the meantime, Ukrainian Prime Minister Arseny Yatseniuk told parliament yesterday he expected talks with Gazprom on gas prices to end this week and, if they prove inconclusive, Ukraine will file a case with a Stockholm arbitration court. He also added that a cut in Russian gas supplies to Ukraine which could disrupt supplies to Europe remains a possibility.

The prime minister reiterated that Kiev would "never" pay close to $500 per 1,000 cubic meters of gas, the price set by Moscow after the ouster in February of Ukraine's Kremlin-backed president. "If Russia thinks of Ukraine as a cash cow, it's wrong," he added. Turkey pays $393 per 1,000 cubic meters of gas. According to Turkish Pipeline Corporation, Turkish natural gas demand is forecast to grow to 81 bcm a year by 2030 from the current 47 bcm/year. Turkey imported 45.2 billion cubic meters of gas in 2013. Turkey meets nearly 60 percent of its gas needs from Russia, from where it imported 26.61 billion cubic meters in 2013.

Until 2003, Russian gas only entered Turkey in transit through Ukraine, Moldova, Romania and Bulgaria. As of Jan. 1, 2013 Turkey imported over 296 billion cubic meters of Russian natural gas. In 2012, supplies amounted to 27.03 billion cubic meters.
RELATED TOPICS