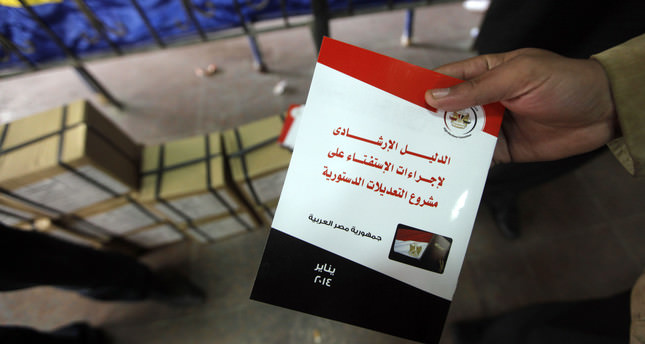 by AA Jun 05, 2014 12:00 am
CAIRO — Egypt's electoral commission has declared the former General as Egypt's president after receiving some 23.7 million valid votes in last week's election. Commission head Judge Anwar al-Asi said that 25,578,223 out of nearly 54 million eligible voters had cast their ballots in the polls with a voter turnout of 47.45 percent. El-Sissi secured 23,780,104 out of 24,537,615 valid votes or nearly 97 percent of the total, al-Asi announced at a press conference in Cairo.

The ceremony will kick off at 10:30am (local time) in the presence of interim President Adly Mansour, Prime Minister Ibrahim Mahhlab, and a host of dignitaries and senior officials, Sami said in a statement. El-Sissi will be sworn in before 12 members of the Supreme Constitutional Court's general assembly, he noted. A highly-placed court source said the swearing-in ceremony would be followed by an official inauguration at the Ittihadiya presidential palace, which will be attended by foreign heads of state and other leaders invited by the Egyptian presidency.

Shortly afterward, another ceremony will bring together 102 figures representing a range of political parties and forces, the source said. While supporters describe Morsi's ouster as a "military coup," opponents term it a "military-backed revolution."

Ever since his overthrow, Morsi's supporters have been staging almost daily protests to demand his reinstatement. The main support bloc of ousted President Mohammed Morsi said it will not recognize former army chief Abdel-Fattah el-Sissi as Egypt's president. "We will not recognize Sissi's election as Egypt's president," Magdi Qorqor, spokesman for the National Alliance for the Defense of Legitimacy, told Anadolu Agency (AA). Morsi was elected as president in the country's first free and fair elections. Qorqor termed el-Sissi's election as "invalid," citing that Morsi, who was ousted by the military headed by Sissi last July, had not resigned. "The election results had been manipulated in light of the low turnout seen by all Egyptians," he said, going on to call for protests on Friday "to demand el-Sissi's ouster."
RELATED TOPICS