Energy issues on the agenda in meeting between Rouhani, Gül 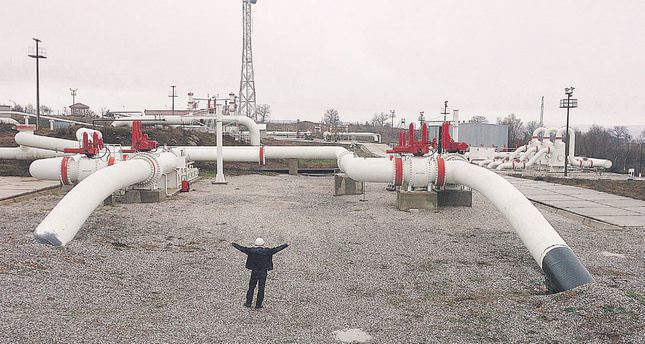 The Turkish and Iranian presidents will meet today in Ankara. Economic relations and energy issues will be brought to the table, expert says

ANKARA — On Monday, Iranian President Hassan Rouhani is scheduled to pay his first official visit to Turkey since he was elected. The matter of energy is supposed to be taken as a primary concern during the visit. Invited by his Turkish counterpart, Abdullah Gül, Rouhani's visit to Turkey is to take place on June 9 and 10.

Bayram Sinkaya, a faculty member in the department of international relations at Yıldırım Beyazıt University, evaluated Rouhani's visit in an interview with an AA correspondent. He said Iran and Turkey are spreading efforts to promote bilateral relations. He stated that matters of energy and trade would be at the top of the agenda. Sinkaya underlined that during Rouhani's visit, the talks will focus on marketing Turkmen gas to Europe passing through Iran and Turkey. "Previously, we were talking about the Nabucco Pipeline, which would transport Iran's gas to Europe through Turkey.

However, this project failed, and some new strides might be made on the issue. The leaders may discuss Iran's participation in the Trans-Anatolian gas pipeline [TANAP]. These topics will definitely come to the forefront," Sinkaya stated. Sinkaya also noted that the arbitration procedure, which was initiated by Turkey to get a reduced gas quote from Iran, is in progress. He said Iran is offering to renew the natural gas agreement with Turkey by stipulating that Turkey shall augment the amount of natural gas that it imports from Iran.

Previously, Turkey had prevailed on Iran concerning arbitration and obtained a redress of $900 million and a discount of 16 percent in the purchase of natural gas. Sinkaya proposed that the two countries might strike some deals on the electricity trade. "Turkey purchases electric energy from Iran in some regions, and similarly, Iran is in need of Turkey's electricity for some of its regions.

Most probably, the countries will touch upon this issue as well," he added. "The project of the common industrial estate to be constructed in Iğdır may be another important point to be addressed. As this convention between the two countries partakes of a strategic cooperation meeting, it might set the stage for a number of further agreements," he continued. "A large number of Iranian and Turkish ministers will also come to the table during the talks. Within the scope of strategic cooperation meetings held so far, many agreements have been inked. During the previous congresses that took place in Syria and Iraq, some 30 or 40 agreements were signed at one and the same time," he said.

According to the Fars News Agency, Iran and Turkey aim to increase their bilateral trade volume to $30 billion as of 2015. The arbitration procedure that came as a result of a dispute over the price of natural gas between Iran and Turkey kicked off on Feb. 17, as Turkey requested a reduction of approximately 25 percent in natural gas purchases.

A few days ago, Iranian Oil Minister Bicen Zengene suggested that if Turkey increased its natural gas import from Iran, they could make amendments in prices. Currently, Turkey is importing 10 billion cubic meters of natural gas per year. Iran is reselling natural gas, which it imports from Turkmenistan, to Turkey. Turkey receives most of its natural gas requirement from Russia; however, it buys the most expensive gas from Iran. Negotiations between the authorities of the two countries are ongoing. The commercial connection between Iran and Turkey is carried out through Halkbank. Iran is demanding an alternative bank to Halkbank, and Turkey, in return, wants to come to terms with Iran by pondering the alternatives.

The bilateral trade volume between the countries is expected to upsurge to $30 billion by 2023. And it is expected to climb by $20 billion by the end of this year. A number of accords on various topics including political, economic and cultural collaboration are supposed to be signed with Rouhani, who has held the presidential office since last August, in addition to the Turkey-Iran high-level strategic cooperation council. The questions of Syria, Egypt, Israel-Palestine and Iran's nuclear program will also be addressed during the talks.

Iranian Communication and Information Technologies Minister Mahmoud Vaizi, who paid a preliminary visit to Turkey on Wednesday ahead of Rouhani, held talks with Prime Minister Recep Tayyip Erdoğan and other relevant ministers. Vaizi said, "The Turkish authorities are willing to increase natural gas import from Iran, and Iran is ready to satisfy this request." According to a report by Iran's Press TV, Vaizi said the negotiations between Tehran and Ankara concerning Iran's natural gas transportation to Europe are under way.

Iran was Turkey's third-largest export market in 2012. In fact, Iranian media said Turkey exports more than 20,000 products to Iran, among them gold and silver. Washington has been unhappy over continued trade with Iran by its Turkish ally and has blacklisted some Turkish firms involved in sidestepping the sanctions imposed on Iran over its disputed nuclear program. Communications Minister Vaizi said, "Six cooperation agreements in various fields, including the energy sector, will be signed during Rouhani's visit to Ankara," Iran's state TV reported.
RELATED TOPICS