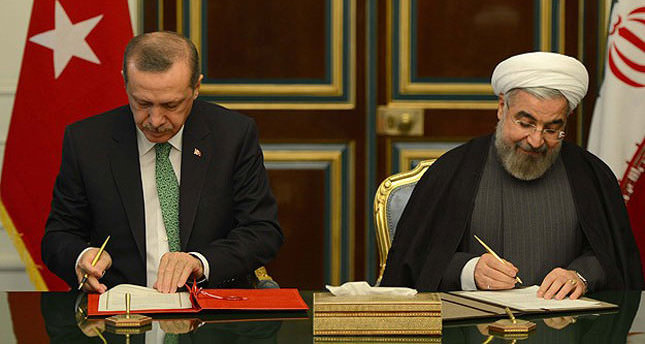 by AA Jun 10, 2014 12:00 am
ANKARA — Iran's four-page discount proposal on the price of natural gas it sells to Turkey is "not enough", said Turkish Energy Minister Taner Yildiz said Tuesday after attending a Turkey-Iran Business Forum in Ankara, the Turkish capital.

Iran has also imposed a condition that Turkey withdraw from the five-month-old arbitration talks on the price Iran charges for natural gas, "this
we refused," said Yildiz.
The latest concession from Iran was two months ago when it offered a potential discount if Turkey increases the amount it buys.
"Iran's offer did not have a concrete price discount," Yildiz said.
Negotiations between Turkey and Iran on energy topics and a discount on the natural gas that Turkey buys from Iran will continue next week, the Turkish minister said.
Iranian President Rouhani arrived in Ankara on Monday for his first official visit to Turkey since becoming president a year ago. He is accompanied by a number of Iranian cabinet ministers, high-ranking officials and more than 100 business people.
An energy-hungry Turkey imports 10 billion cubic meters of natural gas at a price of $507 per cubic meters, however, Turkey complains about the high prices and the lack of security for the energy supply from Iran which sporadically halts gas flow. Russia is the second largest supplier of gas to Turkey, charging US$429 for the same amount.
Last Update: Jun 10, 2014 4:42 pm
RELATED TOPICS