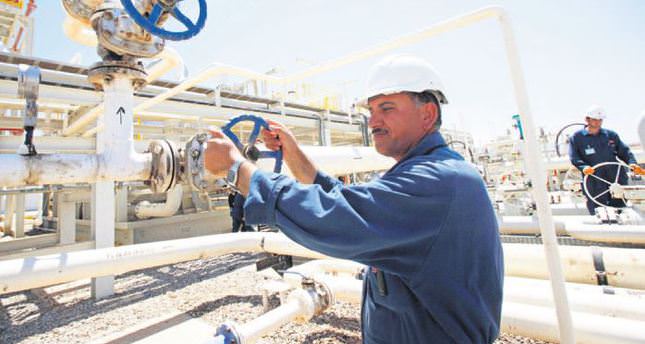 by Ali Ünal Jun 14, 2014 12:00 am
Kurdish oil from the Kurdistan Regional Government (KRG) to the southern Turkish port of Ceyhan has continued to flow at a pace of 120,000 barrels per day despite the threat posed by the Islamic State of Iraq and the Levant (ISIL).

Hundreds of ISIL militants stormed the Turkish consulate in the northern Iraqi city of Mosul and took 49 people hostage on Wednesday. Moreover ISIL members took control of major parts of Mosul and Tikrit and have vowed to march on Baghdad. Amid this chaos Kurdish forces took control of the Iraqi northern oil hub of Kirkuk on Thursday to protect the major oil field against advancing ISIL militants.

Officials from the Turkish state-owned crude oil and natural gas transportation and trading company (BOTAŞ) said that oil flow from the KRG region to Ceyhan has continued without interruption. "Since the ISIL crisis started we did not encounter any problems and on a daily basis 120,000 barrels of Kurdish oil continues flow to Ceyhan via the pipeline without interruption," a senior official from BOTAŞ remarked.
Last December the KRG administration completed construction of the Taq Taq-Khurmala-Fish Khabur pipeline that connects the Taq Taq oil field to the entry point for the Kirkuk-Ceyhan pipeline. Since then Kurdish oil exports have continued uninterrupted in a pipeline that capable of sending a maximum of 300,000 barrels of oil per day to Turkey.

BOTAS officials also added that they are expecting KRG oil exports via oil tankers to continue. KRG oil exports from the port of Ceyhan began on May 23 and so far almost 2 million barrels of crude oil has sailed with the tankers. The first tanker, United Leadership, which left the Turkish port in May, is parked off the coast of Morocco and the second one, United Emblem, is waiting on the coast of Malta for its final destination as of last Friday.

While Baghdad and Washington are continuing to oppose the sale of KRG oil to international markets via Ceyhan, Reuters reported that Kurdish oil is finding new buyers in Europe. Russian oil firm Rosneft bought a shipment of Kurdish oil for a German refinery it co-owns with oil major BP, quietly circumventing Baghdad's ban on independent oil sales by its autonomous region, according to trading sources.

Whereas oil industry sources reported recently that Baghdad and Irbil may have reached a consensus on exporting Kurdish oil via Turkey, the conflict in the north of the country has oil industry sources expecting that Kurdish forces efforts to help push back ISIL militants in Iraq could boost the prospects of a resolution to the long-running dispute between Baghdad and Irbil over oil exports.
RELATED TOPICS