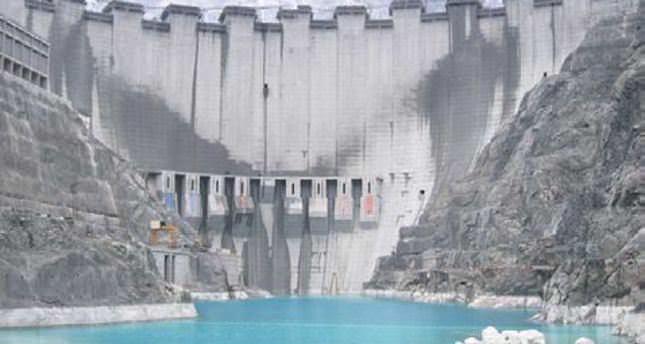 by Daily Sabah Jun 16, 2014 12:00 am
Minister of Forestry and Water Affairs Veysel Eroğlu, announced yesterday that thanks to the numerous hydroelectric power plants built across Turkey in recent years, the country saved $15 billion (TL 31.9 billion), which would have otherwise been spent on buying electricity from foreign sources. "Since that $15 billion is saved, Turkey has used saved revenue to build tunnels, highways, airports, schools and universities," said Eroğlu. Eroğlu noted that one dam and one hydroelectric plant has been built on Çoruh River.

"We then completed the Borçka Dam and the Deriner Dam, which is one of the biggest dams in Turkey now on the Çoruh River," added Eroğlu. He further stated that Turkish Prime Minister Recep Tayyip Erdoğan attended the opening of the Artun Dam located between İspir and Yusufeli and added that the Artun Dam, also located on the Çoruh river, has the potential to collect 280 million cubic meters of water. "This means we can now meet the energy requirements of all villages, center and the industrial facilities of Erzurum with one dam," said Eroğlu.

Stressing how huge the power production capacity is, he stated that such investments provide resources and employment opportunities for Turkey, which otherwise would have to import natural gas, oil or coal to meet such energy requirements. Emphasizing the importance of hydroelectric plants for economic development, he added that such investments are also beneficial for controlling erosion and fishery industry.

The operation costs of the Artun Dem total about TL 1 billion and the dam was constructed by a private company. Tenders will be opened for the operation of the facility for up to 49 years and the operator will sell the energy produced to the domestic market.

Eroğlu further stated that the tender will be awarded to the company that will pay more contribution to the state per kilowatt-hour. "The state will be earning TL 42 million from this facility.

This means that we do not make any investments but earn money from hydroelectric plants that we then use in other infrastructure investments for schools, highways, roads, airports, etc.," said Eroğlu.
RELATED TOPICS