KRG oil export via Ceyhan to continue despite unrest in Iraq 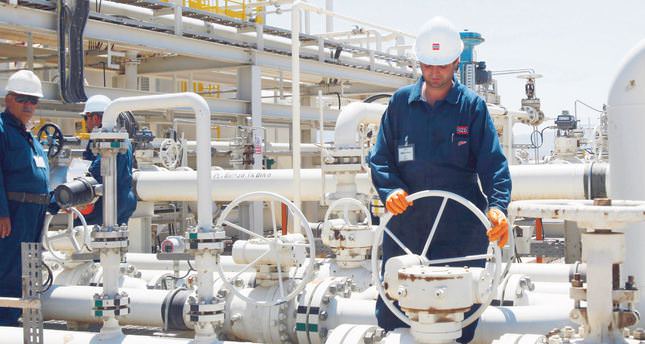 Iraq, the largest oil supplier to Turkey, is now tumbling with a new turmoil based on sectarian conflicts, but Turkish authorities deny that there will setbacks in oil imports from the country

It was announced yesterday that oil from the Kurdistan Regional Government (KRG) will continue to be exported via the southern Turkish port of Ceyhan amid chaos caused by Islamic State of Iraq and the Syria (ISIS) militants. Turkey's Energy Minister Taner Yıldız said a third tanker carrying KRG oil stored in Ceyhan would transport oil for sale on the international market on June 22. "A third tanker is scheduled on June 22 to export the oil coming from northern Iraq," Yıldız told reporters yesterday in Ankara. However, the minister said, "we do not deal in where the oil will be sent." Yıldız also confirmed that oil shippments from the KRG to Ceyhan are continuing despite the threat posed by ISIS militants. "The oil flow is going on now but in the upcoming period whether these will be interrupted is not foreseeable," Yıldız remarked.

Turkey's Energy Minister Taner Yıldız announced yesterday that oil from the Kurdistan Regional Government (KRG) will continue to be exported via the southern Turkish port of Ceyhan amid chaos caused by Islamic State of Iraq and the Levant (ISIS) militants.

Turkey's state-owned crude oil and natural gas transportation and trading company (BOTAŞ) officials also confirmed that oil shipments have continued without interruption since the ISIS crisis started. Sources added that on a daily basis 120,000 barrels of Kurdish oil flow to Ceyhan via the pipeline without interruption. Last December the KRG administration completed construction of the Taq Taq-Khurmala-Fish Khabur pipeline that connects the Taq Taq oil field to the entry point for the Kirkuk-Ceyhan pipeline. Since then Kurdish oil exports have continued uninterrupted in a pipeline capable of sending a maximum of 300,000 barrels of oil per day to Turkey.

KRG oil exports from the port of Ceyhan began on May 23 and so far almost 2 million barrels of crude oil have been loaded onto tankers. The first tanker, United Leadership, which left the Turkish port in May, is currently positioned off the coast of Morocco. However the second tanker, United Emblem, sailed to Ceyhan yesterday afternoon.

According to industry sources after two days of waiting on the coast of Malta, United Emblem transferred its cargo to the Liberia flagged tanker SCF Altai and headed for the Israeli Port Ashkelon.

While the fate of oil in the first two tankers is not yet clear, Irbil-based Kurdish news portal Rudaw reported on Sunday that Kurdish oil, the sale of which was impeded by Baghdad and Washington, has been sold to buyers in Austria and India.

According to Rudaw recent events in Iraq have diminished concerns about Baghdad's famous blacklist for any firms that buy Kurdish oil exports. The Kurdish news portal also claimed that Irbil's bargaining power has risen tremendously, as Baghdad and Washington both look to the Kurdish Peshmerga military as the best hope to stop the dangerous sweep by the mix of militants and insurgents.

In line with this statement oil industry sources told Daily Sabah that Baghdad and Irbil may have reached a consensus on exporting Kurdish oil via Turkey. The conflict in the north of the country has oil industry sources expecting that Kurdish forces efforts to help push back ISIS militants in Iraq could boost the prospects of a resolution to the long-running dispute between Baghdad and Irbil over oil exports.
Meanwhile foreign media outlets reported that ISIS militants took control of the Baiji oil refinery in Tikrit, northern Iraq. The Baiji refinery is Iraq's largest oil refinery with a capacity to produce over 300,000 barrels of oil per day, and supplies oil to the majority of Iraq. The refinery is also tasked with supplying fuel to power Baghdad, Iraq's capital city.

Kurdish officials have repeatedly stated that more than 100,000 Kurdish fighters, known as the pershmerga, are guarding a front line from Iraq's eastern border with Iran to the northern town of Fishkabur, a measure taken to ensure KRG oil exports will not be affected.

In the meantime, Brent Crude prices reached their highest levels since last September and it achieved its biggest weekly gain this year amid concerns that developments in Iraq may affect global supplies. Oil traders have commented that higher oil prices are a reaction to concern over future production from northern Iraq.

However, the Paris-based International Energy Agency put out its monthly report on oil supplies Friday, amid the turmoil, saying Iraq's oil exporting is not at immediate risk. "Concerning as the latest events in Iraq may be, they might not for now, if the conflict does not spread further, put additional Iraqi oil supplies immediately at risk," the IEA said.

Apart from uncertainty in Iraq, Turkish officials assure that Turkey is not facing a problem with oil supply, although the figures indicate a clear increase in the share of Iraqi oil import. The Energy Market Regulatory Authority reported that Iraq ranked first among countries where Turkey imports oil from in 2013, accounting for 32 percent. According to the Regulatory Authority's 2013 Oil Sector Report, Iraq's share in Turkey's oil imports surged from 19 percent to 32 percent in 2013. However, sources also stated that Iraq's central government hasn't exported any oil from its north since March due to repeated attacks on its pipeline to Turkey and because Iraq's oil production is concentrated in the far south of the country.
Last Update: Jun 17, 2014 1:15 am
RELATED TOPICS