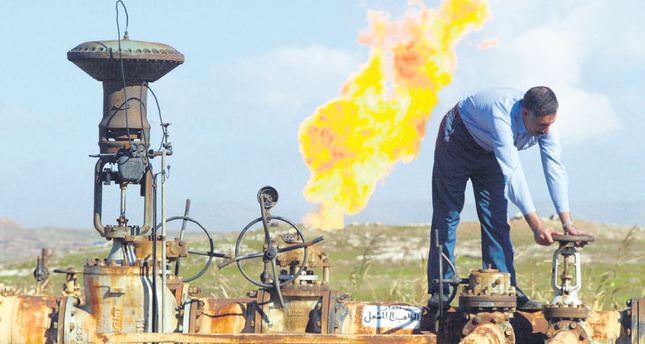 The Kurdish Regional Government in northern Iraq announced on Wednesday its intention to boost its oil exports by including the oil fields it seized in and around Kirkuk in the last two weeks and noted that it would be using the pipeline via Turkey.

Iraq's self-ruling Kurds outlined plans on Wednesday to swiftly ramp up oil exports now that their forces have seized control of Iraq's main northern oil fields, a move that could tear up the settlement holding Iraq together since the fall of Saddam.

Experts underscore that latest developments increase the importance of the partnership between Turkey and Kurdish Regional Government (KRG).
Kurdish Natural Resources Minister Ashti Hawrami told Reuters the Kurds had plans to increase their exports eight-fold by the end of 2015, including pumping oil from the fields taken by Kurdish fighters two weeks ago. "We expect to be able to export 1 million bpd by the end of next year, including crude from Kirkuk," he said, although he insisted the Kurds would share the proceeds with Baghdad. "We want to work with Baghdad under the constitution, and they will get their share of the oil they export from Kirkuk." Kurdish oil sales are firmly opposed by the central government in Iraq which says they violate the constitution.

Increasing them to such levels would radically alter the balance of power in Iraq, potentially requiring the central government to seek payment from the Kurds for some revenue, rather than the other way around. Two weeks ago Kurdish "peshmerga" troops took control of Kirkuk - a city Kurds consider their ancestral capital - and outlying rural areas rich in oil, expanding their territory by more than a third.

The Kurds say they were filling a security vacuum after Iraqi troops fled from Sunni fighters of the hardline Islamic State in Iraq and the al-Sham, who seized the biggest northern city Mosul at the start of a lightning offensive on June 10. Hawrami told Reuters the fall of Mosul had transformed Iraq, suggesting this would require a new settlement over oil rights. "Resources and revenues must be shared. But pre-Mosul Iraq has gone and there is now a new reality," Hawrami said during an interview at his office near Kurdish regional parliament. "We will not be dictated to by some people in Baghdad who want to centralise power, to bully and intimidate. We need a real federal system based on power sharing and revenue sharing." Iraq's Kurds have prospered since the fall of Saddam Hussein in 2003 while ruling themselves under a settlement under which all Iraqi oil was sold by the government in Baghdad and the Kurdish region given a fixed percentage of the total income.

But that deal has unravelled this year after the Kurds began pumping their own smaller amounts of oil to port in Turkey and the central government cut off their share of budget funds. The Kurds sold their first tankers full of oil to Israel last month.

The 125,000 barrels of oil per day the Kurds have so far been able to pump abroad provides only a fraction of the money they have received in the past from Baghdad, but control of the oil fields in Kirkuk could bring a much larger windfall. U.S. Secretary of State John Kerry visited the Kurdish capital Arbil on Tuesday to urge the Kurds to support an inclusive government in Baghdad. But privately some Kurdish officials suggest they are finished with Iraq and are waiting for an opportunity to break free, with control over most of the oil in northern Iraq making that easier to envision.
Western oil firms have rushed to do business with the Kurds, defying blandishments from Baghdad, which says any such deals are illegal. About 20 Western energy executives were waiting to meet Hawrami on Wednesday when Reuters visited his office. Iraq's northern oil fields around Kirkuk have been cut off from exports for months because Sunni insurgents have destroyed the main pipeline to Turkey and threatened any engineers sent to fix it.

Hawrami said the only reliable way to resume exports was to hook up Kirkuk to the separate pipeline operated and guarded by the Kurds. "We agreed with the North Oil Company and Baghdad to link the three domes at Kirkuk and other adjacent fields to our export pipeline about three months ago, and the construction of the pipeline is already completed.

It needs to be tested and commissioned, but it should not take much time," Hawrami said. "Baghdad agreed to link into our line as their own pipeline has been sabotaged so many times. It is now in territory wholly controlled by insurgents, and even if they could get it back it would take 6-12 months to repair it as it has been so badly damaged," he said.

He added that the Kurds would not act on their own: "We need to have an agreement with Baghdad. We're not going to start exporting oil from Kirkuk unilaterally."

The Kurdish export pipeline has a capacity of 300,000 bpd but could quickly be expanded with a few minor tweaks and additional pumping stations, he said, dismissing the idea that threats from Baghdad would keep firms from buying Kurdish oil. "Oil companies and governments around the world are now showing increasing interest in buying our crude. Many have already done so," he said. "Baghdad made the same threats when the big energy companies first wanted to come and work here," Hawrami said. "We know how this plays out."

Speaking on the matter to the Daily Sabah, energy expert Dr. Cemil Ertem, noted that Kirkuk's energy transport infrastructure is directly connected to the Turkey, which means KRG will be able to export more crude oil to international market via Turkey's Ceyhan Port. "Latest developments in Iraq, especially the ones about Kurdish progress and energy sources, serves Turkey's longterm purposes. Because, the more KRG get authority on the energy sources in northern Iraq, the more Turkey's role in the region increase," he concluded.

Speaking about the issue, energy expert at Hazar Energy Institute İbrahim Palaz told Daily Sabah that the KRG has always been a strategic partner of Turkey. "Now, KRG has de facto sovereignty in Kirkuk, a city with huge oil and natural gas reserves. Turkey should not sit back and watch what happens in the region, instead, Turkey should prove that it is a good partner of the KRG," Palaz remarked. He also highlighted that the newly-emerging political situation in northern Iraq would provide new economic and political openings for Turkey. "If Turkey happens to miss those opportunities, it would be the same thing as loosing Kirkuk and Mosul during World War I [Turkish troops had to leave Mosul and Kirkuk during the
First World War even though the population of these cities largely comprised Turkish people]."
Last Update: Jun 27, 2014 1:26 am
RELATED TOPICS