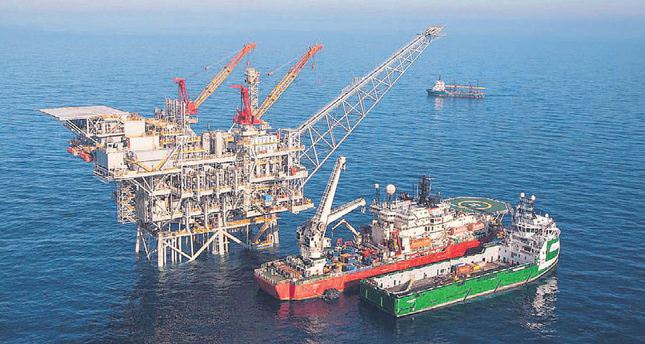 Natural gas discoveries off the coast of Cyprus have brought the state of relations between the island nation and the Levant into question. During an interview with an Anadolu Agency (AA) correspondent, experts commented on the energy issues in light of present political developments in the region. George Pamboridis, a specialist of international relations and law, stressed the necessity of establishing cooperation under Turkish and Greek leadership based on economic grounds and said, "Cypriot communities should collaborate to use natural gas and oil resources effectively."
Pamboridis mentioned U.S. Vice President Joe Biden's May visit to Cyprus and described it as an indicator of the U.S.'s increasing attention in the region.

"Discovery of energy sources in Israel and Cyprus caused the U.S. to realign its policies in the region," he added. Pamboridis, who is also the author of the book titled "Hydrocarbons of the Republic of Cyprus," said that European countries are the most important clients for the natural gas that Cyprus will be exporting." "The energy reservoirs will also contribute positively to the peace process on the island. Apart from the Turkish and Greek communities on the island, Israel, the U.S., Turkey, Lebanon, Syria and Egypt will reap the benefit of the peace process in Cyprus.

The U.S. has awoken to the fact that the energy sources may be used as a means of ending the ongoing contentions in the region. Cyprus should lay a scheme to collaborate with Israel, which has made significant source discoveries, and Lebanon, which also has made promising discoveries up to now," he added. He also stressed the fact that a pipeline, which is slated to be constructed in Turkey, will provide a great commercial advantage by transporting the natural gas reservoirs to international markets. He continued, "If this gas has a price that can compete with Russian gas, the Turkish market, which is an industrial giant, will take advantage of a new natural gas source that will be an alternative to Russian natural gas."

Ayla Gürel, senior research consultant at the Peace Research Institute Oslo, and involved with the PRIO Cyprus Centre, put forward that the discovery of energy sources off Cyprus will bring new disputes between Turkey and Cyprus. "When we look at the whole picture, there has always been dissidence in Cyprus. Exploration of energy resources exacerbates present divergence. There is an attitudinal problem between the two parties on the island. In order for Europe to take the benefits of Cyprus's energy resources, the political situation on island should be improved. The lack of an arbitrator for negotiations hampers the talks further," she said.

Moreover, the Cyprus Weekly reported that some U.S.-based companies are ready to invest in a multi-million dollar liquefied natural gas plant on Cyprus regardless of any political settlement concerning the divided island's long-standing problem, citing diplomatic sources. "U.S. officials have various scenarios in their minds for the region. They want to see strengthened relations between Israel, Egypt and other neighboring countries.

Israel, of course, is their main focus point," one source told the paper. "They see Cyprus as a stabilizing factor in this turbulent region, especially now with all the strife going on. And with Turkey being in the corner... this is good timing for Cyprus," added the source who the Cyprus Weekly quotes as saying that hydrocarbons in the region will be a catalyst for peace because "money talks." The paper also reported that threats by Turkey to place companies involved in offshore exploration in Cyprus's waters on a "black list" have not stopped more oil and gas giants - including ENI, Total and Halliburton - from signing contracts with Nicosia and setting up offices in Cyprus.
RELATED TOPICS