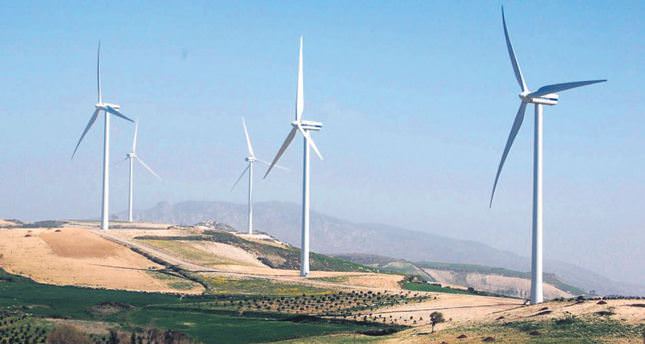 by AA Jul 11, 2014 12:00 am
The World Bank has agreed to lend $350 million to Turkey for its Renewable Energy Integration Project, Turkish Treasury officials have said. The funding aims to help Turkey meet its increasing power demand by facilitating large-scale renewable energy generation, a project which will be implemented by the Turkish electricity transmission company (TEİAŞ) and is guaranteed by the Turkish Treasury, officials said in a statement on Thursday.

"The Project aims to extend and strengthen the electricity transmission network, integrate the wind power investments to the transmission network and support the European Network of Transmission System Operators for Electricity," the Treasury statement said. The World Bank said in a separate statement: "From the global environmental point of view, the project aims to avoid greenhouse gas (GHG) emissions from fossil fuel-based power through the greater integration of renewable energy source-based generation in Turkey." Martin Raiser, World Bank Country Director for Turkey said: "Turkey has considerable renewable energy potential, however, substantial public and private investment is needed to fully exploit this resource. "As the World Bank, we have supported Turkey's energy sector reforms for over a decade, with the objective of making Turkey's energy sector cleaner, more secure and less dependent on imports. This project is another important step in this direction."

Turkey generates 43 percent of its energy needs from natural gas, a quarter from both coal and hydro-electricity and 7 percent from renewables. Domestic reserves of oil and gas can only meet 10 percent of Turkey's current annual consumption, and the country relies on costly energy imports to fuel its growing economy. The imports are one of the main causes of the country's $60 billion trade deficit and, consequently, Turkey is constantly striving to find new energy sources.

Last Wednesday, the World Bank announced $400 million in additional financing for the first gas storage facility in Turkey's underground salt formation at Tuz Gölü (Salt Lake) - one of the largest hyper-saline lakes in the world. Turkey is second in the world after China in terms of its rising energy demand, and consequently the country aims to increase renewable energy by 30 percent by 2023. The World Bank also provided financing for the Baku-Tbilisi-Ceyhan pipeline, which carries Azerbaijani oil to Turkey, and has helped with other energy projects related to the South Caucasus and energy storage in central Turkey.
Last Update: Jul 11, 2014 10:52 pm
RELATED TOPICS