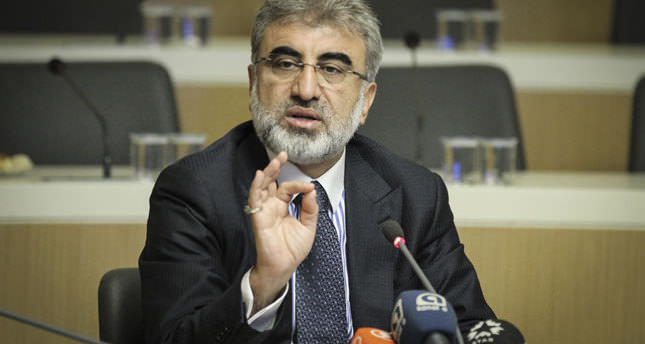 by Daily Sabah Aug 19, 2014 12:00 am
There is a temporary suspension of oil deliveries from the Kurdistan Regional Government to the port of Ceyhan due to maintenance work, but the flow will continue, said Turkish Energy Minister Taner Yıldız.

Turkey's Minister of Energy and Natural Resources Taner Yıldız said on Aug. 18 during a press conference in Ankara that 7.8 million barrels of crude oil were transported from Northern Iraq to Turkey and finally the seventh tanker was directed to international markets. Yıldız noted, "6.5 million barrels of oil were shipped from Turkey.

There won't be any delivery soon since there are some maintenance works on the pipeline." The energy minister stated that agreements which are subject to private law provisions made by public and private sectors would continue. "No matter what, ISIS is not our addressee and we don't make our plans regarding the energy sector with any consideration to remarks or actions by the Islamic State of Iraq and al-Sham (ISIS). Some fields in Iraq pass into other hands because there is serious political instability. But this doesn't change our point of view."

Yıldız said that although it seems like there is a decrease in the price of crude oil, energy costs haven't dropped enough due to the increase in exchange rates. He noted that some goods are sold at lower prices than purchasing prices, adding that they expected a decrease in both crude oil prices and exchange rates.

Answering questions about Iranian natural gas, Yıldız said that there were some meetings in April and July, and after another meeting in September, the process would end. Saying the ministry will closely follow the issue about short delivery from Iran in the past, Yıldız also claimed, "We haven't received a tangible offer from Iran about a reduction in the price so far." Reminding that if Iran offers more natural gas at reasonable prices, Turkey will demand it. Yıldız pointed out that there was an important study about piping but he added that it was a prospective issue.
Last Update: Aug 19, 2014 1:17 am
RELATED TOPICS