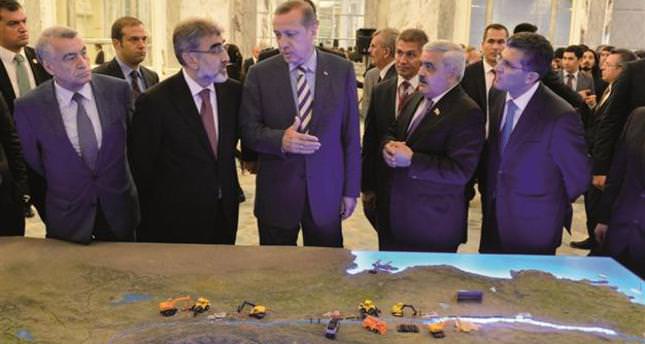 by Daily Sabah Aug 22, 2014 12:00 am
The financing of the stateowned Turkish Petroleum Corporation's (TPAO) decision to increase its share in Iran's Shah Deniz Oil Project from 9 to 19 percent was settled at a ceremony held in Ankara yesterday. Energy Minister Taner Yıldız, speaking at the ceremony, said the oil produced by TPAO within Turkey and overseas was approximately equal to oil produced overseas, adding that with the increase in the Shah Deniz Project this amount would significantly increase.

The TPAO signed a $1 billion (TL 2.18 billion) credit deal with Vakıfbank and Türkiye İş Bank. Yıldız said the government was aiming to satisfy Turkey's growing energy needs through local funding. "The fact that the funding is local is important. It doesn't matter where the oil is extracted," he said. The TPAO paid $1.45 billion for the share increase. The firm will cover $450 million from its own assets, with the rest paid by the seven-year loan provided by the two banks. The loan is the largest granted for a project in the energy sector.

Yıldız noted that Turkey had a 50-year lease on 465 square kilometers of the Shah Deniz Project, making TPAO the second largest shareholder after BP. Turkey had also increased its share in the Trans-Anatolian Pipeline Project (TANAP), which aims at bringing Azerbaijan's natural gas to world markets through Turkey, from 20 to 30 percent, said Yıldız, adding that, "Our profit from these projects was $265 million last year. In 2014 and 2015, we want to double it."

Two days after TPAO had decided to lease 10 more percent of the Shah Deniz Project, it received a bid to sell it for $1.6 billion, the energy minister said. "Two weeks later, another bid worth $2 billion came. We rejected both. Our purpose was to own the oil itself," he said. With the share increase, Turkey will own 19 percent of Shah Deniz Project's daily production of 120,000 barrels of oil. Yıldız said when Iraq has stabilized the oil extracted by Turkey overseas would increase fourfold.

Vakıfbank and İş Bank will provide $500 million each to finance the share increase. TPAO's Acting President Besim Şişman, also speaking at the ceremony, said they were aggressively seeking ways to extract oil and natural gas both within turkey and overseas. Şişman said TPAO's vision entailed an expansion of its projects across the region, especially in Azerbaijan.
Last Update: Aug 22, 2014 1:18 am
RELATED TOPICS