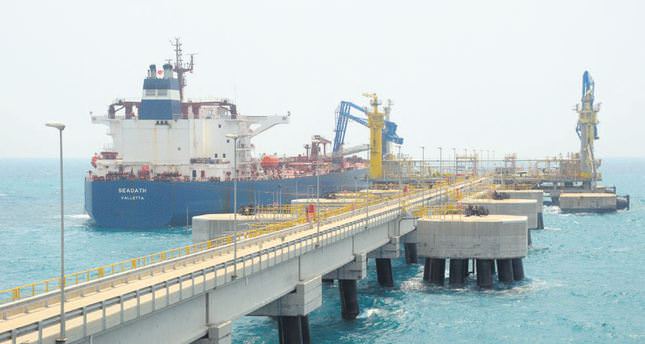 by Ali Ünal Aug 25, 2014 12:00 am
Crude oil flow from the Kurdistan Regional Government(KRG) to Turkeyresumed last Thursday after the completion of capacity increase work and approximately 200,000 of Kurdish oil barrels per day (bpd) continues to flow to the Turkish port of Ceyhan without interruption despite the ongoing threat of ISIS in the northern part of Iraq. More crude oil tankers loaded with Kurdish oil departed from Ceyhan and sailed to international markets over the weekend. According to a source from Turkey's state controlled pipeline operator BOTAŞ, the Spanishflagged tanker Ultimate Freedom and Malta-flagged Phoenix AN left Ceyhan over the weekend and the Greek-flagged crude oil tanker United Carrier is expected to arrive in Ceyhan on Wednesday to continue Kurdish oil export.

Meanwhile oil industry sources said that the Greek-flagged crude oil tanker Kamari, which departed from Ceyhan on Aug 8. with Kurdish oil, sold its Cargo to international buyers and in conjunction with this sale the KRG government has managed to complete the sale of three tankers since Kurdish oil export started via Ceyhan on May 23. Additionally sources from the Turkish Ministry of Energy said last week that Turkey's staterun Halkbank received the payment of the first two shipments and the payment of the third tanker is expected to be received this week.

Despite legal pressure from Baghdad and setbacks in the U.S., KRG oil is finding more buyers in international markets. KRG Oil Minister Ashti Hawrami said last week that they have sold 7 million barrels of oil internationally and underlined that they have the rights to sell in the U.S. However, some shipments have still been tied up by diplomatic and legal pressure from Baghdad. As opposed to other tankers, the United Leadership has been stationed off the Moroccan coast since June and the United Kalavrvta has been stranded in international waters off the U.S. coast since the end of July after a U.S. court spurred the offload of its cargo.

The KRG's total production capacity is currently slightly more than 300,000 barrels per day and it plans to increase this amount to 500,000 by the end of the year.
RELATED TOPICS