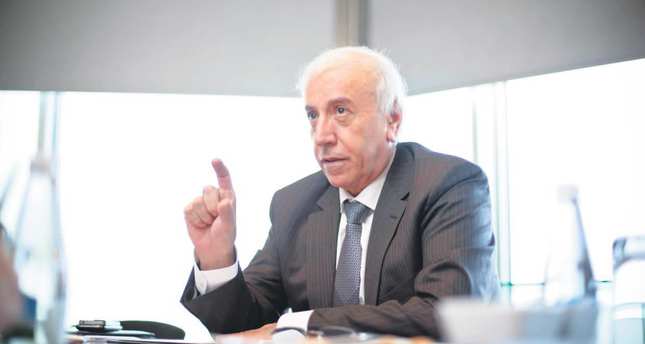 by AA Sep 04, 2014 12:00 am
Attending an event in Istanbul, the Kurdish Regional Government's Minister of Natural Sources of the Ashti Hawrami noted that Kurdish oil is an over-politicized issue. "We are grateful to Turkey for helping us to commercialize our oil. Turkey has proven it is a reliable partner," Hawrami said. Addressing to the audience at the same event, Turkish Deputy Energy Minister Murat Mercan said that Turkey will probably be the most credible oil and gas player, at least in the region, Thursday in Istanbul. "Since 2003, Turkey has been an island of stability, peace and constant growth because of its economic, political and social dynamics,"

Mercan said. "This is not going to change for quite some time." He was speaking at a conference on "Mapping the Future of Energy" at the Grand Tarabya Otel in Istanbul. "Turkey is geographically a natural hub and transit route," he said. "I can give you an example.
The daily oil production of the world is about 90 million barrels per day. Of all these 90 million barrels, can you imagine, 5 percent go through Turkish straits and land."

He said that Europe will continue to be a dominant economic factor and the Mediterranean region will continue to be important.So, he said, because of its stability, there is no alternative in the region for energy transit routes. "Up to now now we have a very successful pipeline management system," he said. "Turkey has everything in terms of making Ceyhan an important hub," Mercan said. "The next objective is to make it reliable and operable soon." Ceyhan, a district of Adana, is a port city in southern Turkey.

Mustafa Yilmaz, the head of the Energy Marketing Regulatory Authority, said Turkey will play a vital part in the marketing of energy globally. "Bringing the energy resources of both Northern Iraq and the eastern Mediterranean to the energy world, Turkey will have a critical role in international energy markets due to its dynamic energy market and geographical advantages," Yilmaz said. Yilmaz said that despite the fact that there are three storage facilities in Turkey, two are for the storage of liquefied natural gas and the other is an underground natural gas storage facility; more storage capability is needed.

Three more storage facilities have already been licensed, which together will give Turkey an additional 5.5 billion cubic meters of storage, he said. He added that companies operating in Turkey, whether international or domestic, would be treated equally and Turkish authorities would not hesitate to withdraw the licenses of those who failed to follow the law.

Turkey's Energy Minister Taner Yıldız commented on the latest developments on Iraqi and Kurdish oil during a press conference in Ankara on Tuesday, and noted that the claims that Turkey buys oil from the Islamic State of Iraq and al-Sham (ISIS) are out-and-out lies."The oil we buy belongs to Iraq," Yildiz said during a press meeting in Turkey's capital, Ankara. Responding to a question on the sales of Northern Iraqi oil, Yildiz said the thirteenth oil tanker has been loaded from the port of Ceyhan and that 180,000 barrels of oil is being transferred daily to Turkey from Northern Iraq.

Twelve oil tankers have left Turkey's Mediterranean port of Ceyhan, (which has a maximum storage capacity of 2.5 million barrels). However, so far only two of those tankers have been sold. Baghdad said the sale of the oil is illegal and has taken the case to an international arbitration court.
The Kurdish government, in the north of Iraq, and Turkish government stated that the sale is in compliance with the Iraqi constitution.