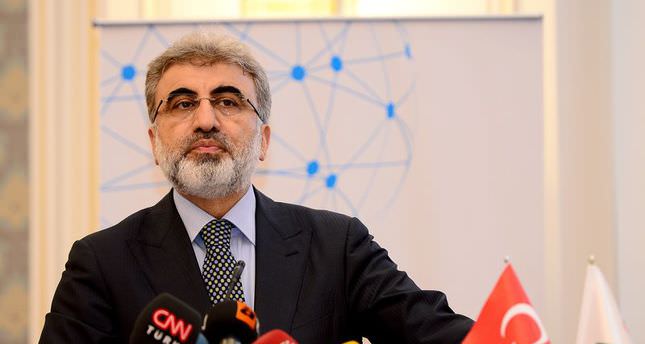 by Daily Sabah Sep 09, 2014 12:00 am
Turkey will not pursue any energy projects with Israel until a permanent peace is established in the region, Turkish Energy Minister Taner Yıldız said on Tuesday. Yıldız attended the "Mediterranean Energy Perspectives - Turkey Report" introduction meeting in Ankara and answered media's questions beforehand.

When asked about the claim that Turkey was used as a transit country for Israeli natural gas, Yıldız said, "We try to use energy projects as requirements for peace. We never talk about the economic feasibility of a project without political feasibility. Our national policy is based on this understanding. "However, without a permanent cease-fire that would satisfy all sides, we cannot think of any energy projects with Israel. People have a tendency to forget the inhumane situation in Gaza, just because we have not seen it in the news for the past few days does not mean we should forget what has been happening in the region."

Energy experts think that Israel needs Turkey's cooperation to commercialize its natural gas reserves and view Turkey as the most reliable route for Israeli gas.Earlier this year, Turkish energy company Turcas Petrol announced that they are considering building a pipeline for natural gas in Israel's Leviathan field.

Last month, Turcas informed Istanbul's stock-exchange, the BIST-100, that they were in talks with Istanbul-based Enerjisa, which is owned by Turkey's Sabancı Holding and German utility E.O.N., to buy the gas from the Israeli field. Turcas CEO Batu Aksoy announced that Turcas and E.O.N.'s unit Enerjisa may grow their alliance to buy Israeli gas and the company may consider building a pipeline for gas from the Leviathan field. According to Aksoy, the pipeline may cost about $2 billion (TL 4.15 billion) and could supply 7-10billion cubic meters gas annually to Turkey via a 500-kilometer undersea route. However, talks suspended due to Israel's raid on Gaza, according to Turkish media outlets.