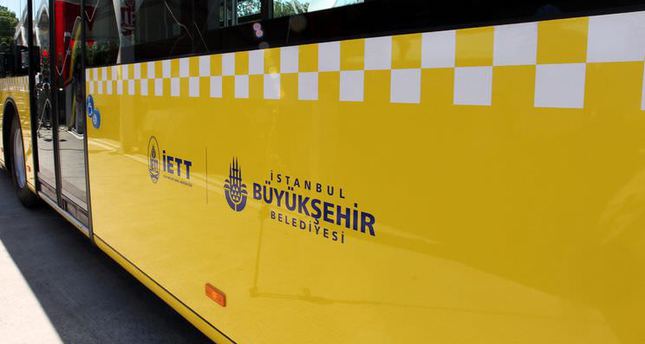 by AA Sep 22, 2014 12:00 am
Speaking to press, the General Manager of Istanbul Electric Tramway and Tunnel Establishments (İETT) – a state-run company responsible for transportation facilities in Istanbul – Mümin Kahveci stated that they will soon start transporting the residents of Istanbul via electrical public transportation devices. He noted that in 2019, they are planning to ensure that the 25 percent of the fleet will be using electricity and 30 percent will be using compressed natural gas (CNG).

Kahveci said that İETT is one of the oldest institutions in Turkey and has been overseeing advancements in the public transportation system.
Stating that they have started renewing the fleet of İETT, Kahveci said they have added 850 new vehicles to their fleet and about 3,000 public busses and other public transportation vehicles have been renewed.

Kahveci stated that there are 360 vehicles that use CNG at the moment and these vehicles consume less fuel, are more environmentally friendly and function with less noise. Because of this they are trying to increase the number of vehicles using CNG fuel.

He further noted that they are now working on acquiring buses that work with electricity and the tests have been successful. "In a short period of time, all residents of Istanbul will be using electrical public transportation devices," said Kahveci.

The electrical vehicles will be used mostly on the metrobus lines and now İETT is working on vehicles that can be operated without a driver. Kahveci further stated that the bridges of Istanbul are a problem since it is not possible to establish a vehicle system using electricity from the catenary. "Therefore, we are working on a system that can cross that part by using an accumulator. When we reach a reliable technological level, we will announce this to the public and start working on it," said Kahveci.

He further noted that after the latest bus accidents they have increased their precautions and added that İETT is now controlling emissions and checking vehicle maintenance and management systems and authorized technical services. "We are now taking vehicles that are not at the required maintenance level out of service. We used to give operation licenses depending on the examination performed annually by TÜVTÜRK.

Now, we have updated this procedure and we are ensuring that each vehicle in the fleet undergoes testing three times a year or we perform instant checks. We are cooperating with various other institutions," said Kahveci.

He announced that 125 bendy busses will be commissioned in a month and added that the fleet is 5.5 years old and is the youngest and most technologically advanced fleet in Europe. Kahveci also stated that various foreign institutions are requesting their assistance and added, "From Pakistan to Saudi Arabia and from various European countries to Israel, our assistance is being requested for the selection of vehicles and maintenance management. Each year, we cooperate with 20 to 25 countries. Furthermore, we have connections with various other metropolitans such as New York, London, Paris, Hong Kong and Kuala Lumpur. We arrange meetings with them and exchange information."

Kahveci stated that the public transportation fees will not be amended and they will continue subsidizing students so that every time a student uses the smart ticket system, the state pays an additional TL 0.15 to the transportation authorities of the metropolitan municipality.