US offers LNG to Europe to hurt Russians 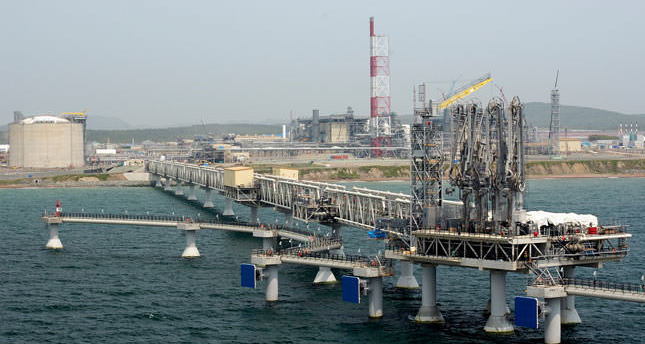 by Barış Ergin Oct 25, 2014 12:00 am
Oil and natural gas wars have begun. The U.S. is planning on freeing Europe from its dependency on Russian natural gas by trying to import cheap natural gas. The 30 percent decline in crude oil prices is also putting pressure on LNG prices. The year 2014 has marked the start of a new war in energy markets. The war between natural gas and crude oil will possible intensify in 2015.

After a shale gas revolution, the U.S. will soon become the newest exporter of liquefied natural gas (LNG), and for a price that is four times less than that offered by Australia and Qatar. Along with these developments, a drop of $82 (TL 183.23) in crude oil prices will cause the competition between these two energy types to get even fiercer since LNG can replace oil. The danger limit of the price of crude oil for LNG firms is $60 per barrel. The expectation that the prices of crude oil will drop even more is already causing the prices of shares of LNG firms to drop. The decrease in value of such shares is currently around 25 percent.

When the prices of Brent petrol reached 30 percent, countries such as Turkey, which are dependent on foreign countries for energy, gained an advantage. When the price dropped below $85, the global economy gained more than $1 trillion. OPEC countries faced a loss of approximately $200 billion because of the falling prices.