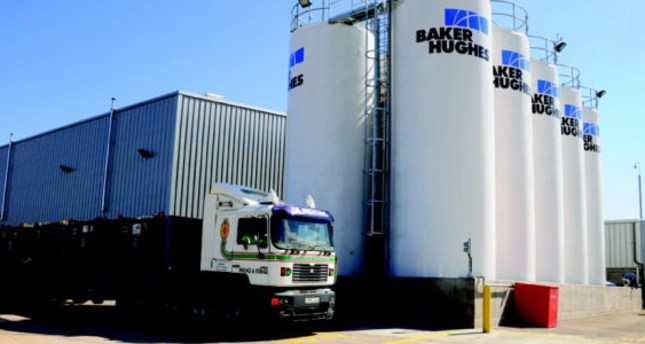 by Nov 14, 2014 12:00 am
U.S. oilfield services company Baker Hughes said yesterday it was in preliminary talks with Halliburton on a possible merger, confirming media reports on the negotiations. In a brief statement, Baker Hughes, the world's third-biggest company in the oilfield services industry by market capitalization, said the discussions "may or may not lead to any transaction" with Halliburton, the world's second-largest in the sector. The announcement comes with oil prices at their lowest levels since 2010. That could force oil companies to trim their exploration operations, dealing a blow to subcontractors like Baker Hughes and Halliburton, both based in Houston, Texas. Baker Hughes shares shot up 15 percent Thursday on the first word of the talks, raising its market value to $25.4 billion. Halliburton has a market capitalization of $45.5 billion, while the world's leader in the field, Schlumberger, has a market capitalization of $122 billion. The Baker Hughes statement said little else. The Wall Street Journal (WSJ) said earlier that talks had accelerated in recent days and a deal could be imminent. The paper said the two companies' activities overlap in many areas, which would allow for productivity gains after a restructuring is completed. The WSJ said a merged company would rise to the top global ranks in several sectors including fracking in which it would control a 36 percent stake in the market.