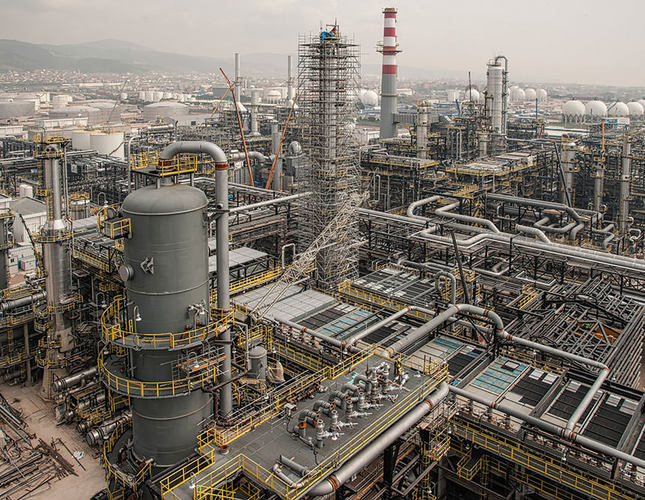 by Daily Sabah with Reuters Dec 01, 2014 12:00 am
TÜPRAŞ, Turkey's largest industrial enterprise with four oil refineries, announced on Monday that the construction of the Fuel Oil Conversion Facility has been completed and the testing phase has begun. The facility is the largest industrial investment in Turkish history with a value of $3 billion, and includes connections to TÜPRAŞ's pier and railway line.

Speaking at a press conference Erol Memioğlu, chairman of Koç Energy Group, stated that they have invested a total of $5.2 billion since Koç Holding took over TÜPRAŞ in 2005. "We are continuously making efforts to make TÜPRAŞ the most competitive refinery in the Mediterranean region, and contributing more to the Turkish economy," Memioğlu said. Pointing out the significance of the facility in reducing diesel imports, Memioğlu said that an annual decrease by $1 billion is expected in Turkey's current account deficit, which accounts for up to ten percent of Turkey's diesel imports.

TÜPRAŞ General Manager Yavuz Erkut said that the facility, which will begin operations on Dec. 15, will also contribute to the efficiency of existing refineries, and will produce more eco-friendly products. To describe the magnitude of the project, Erkut said that six Eiffel Towers could have been built with the steel used in the project, that the total length of the pipes would traverse Turkey from its western border to the eastern, and five thousand residences could have been built. An average of 10,000 employees took part in the construction. 500 people will be employed in the new facility, Erkut added. Erkut said that despite the sharp fall in oil prices, the company maintained its target at the plant, contributing an annual $500-550 million to EBITDA.

Lacking any major hydrocarbons production, Turkey depends on imports for almost all of its energy needs. It has a surplus of gasoline but is heavily dependent on diesel imports. Growing vehicle demand and gasoline substitution have been the main drivers of booming diesel consumption.

TÜPRAŞ has a total refining capacity of 28.1 million tons in four refineries.