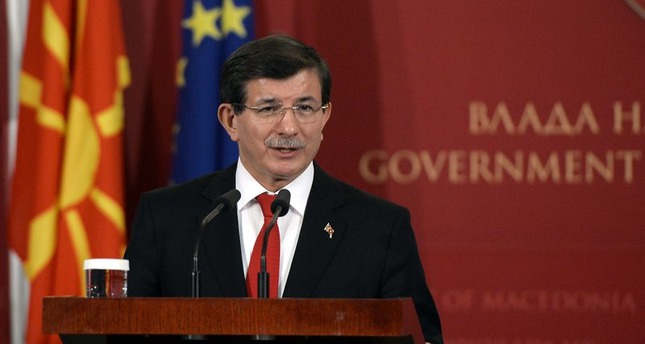 by AA Dec 23, 2014 12:00 am
Turkish Prime Minister Ahmet Davutoğlu stressed on Tuesday Ankara's ambition to make the country a transit hub for all energy in the region.

"All energy will flow via Turkey just as all roads lead to Rome," he said in a conference of ambassadors in the Macedonian capital of Skopje.

He made the remarks following talks with Macedonian President Gjorge Ivanov and Prime Minister Nikola Gruevski, as part of his two-day visit to the Balkan country.

Davutoğlu noted that Turkey could serve as the most practical transit hub for energy destined to neighboring countries.

The premier stressed the country's need for more energy, saying it had to take advantage of all opportunities to draw more energy to Turkey "no matter where it comes from or where it goes."

Davutoğlu highlighted the diversity of energy projects Turkey was engaged in, such as the Trans Anatolia Natural Gas Pipeline, or TANAP.

TANAP is projected to transport natural gas from the Azerbaijani Shah Deniz 2 field on the Caspian Sea and other Azerbaijani fields, through Turkey to Europe.

The Trans Adriatic Pipeline will connect with TANAP on the east side of the Greek-Turkish border to transport natural gas to the Italian network.

Davutoğlu also mentioned the South Stream pipeline, which was planned to carry gas from Russia through Bulgaria to reach European markets.

Instead, in a visit to Ankara in early December, Putin proposed a new natural gas pipeline route that would carry gas from Russia through Turkey.