Qatar may fund energy, other projects in Venezuela 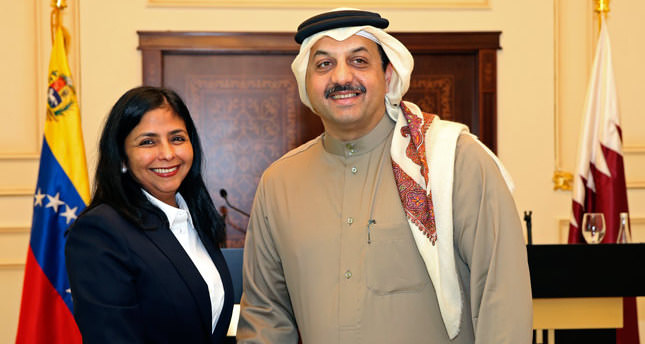 by Jan 17, 2015 12:00 am
Qatar is considering funding projects in Venezuela, industry and diplomatic sources said, as the Latin American state lobbies fellow crude producers to help repair the damage done to its economy by plummeting oil revenues. Venezuela's President Nicolas Maduro said during a visit to Doha on Monday that his country was firming up billions of dollars of financing from Qatari banks. Industry sources in Qatar said on Thursday the country was still studying the possibility of investing in Venezuela's energy, real estate and tourism sectors.

"There's no money being allocated from Qatar yet. We are just in a study phase which can include building a refinery in Venezuela over two years," said a source close to the Qatari government. He declined to be named because of the sensitivity of the issue. The Qatari foreign and finance ministries did not respond to requests for comment. With crude prices trading around 60 percent down from their June 2014 peaks at below $48 a barrel and Venezuela relying on oil for 96 percent of its hard currency revenues, Maduro also sought to persuade Qatari officials to support an output cut by the OPEC producer group, to which both countries belong. But on Tuesday United Arab Emirates Energy Minister Suhail bin Mohammed al-Mazroui said he stood by comments from OPEC heavyweight Saudi Arabia that the group would not cut production.

"Qatar like other Gulf states understands that some countries are suffering but there is nothing we can do about it, our production is very small in any case," an energy industry source in Doha told Reuters. Qatar's current oil output capacity is around 900,000 barrels per day (bpd), one of OPEC's smallest producers. Worsening financial conditions in Venezuela, which seeks an oil price of around $100, have fanned market anxiety about a possible sovereign default. Moody's Investors Service said on Tuesday there was a high risk of this as it chopped the country's credit rating further into junk territory, though Maduro has promised to pay bondholders and many economists doubt a default is coming soon. Credit Suisse estimates Venezuela faces a foreign exchange financing gap of $33.9 billion should its oil basket average $50 this year. The basket dropped to $42.44 per barrel last week. Venezuela is also looking to increase food exports to Qatar, which imports more than 90 percent of its food supplies, diplomatic sources in Qatar said.