BP becomes a partner in the Trans-Anatolian gas pipeline 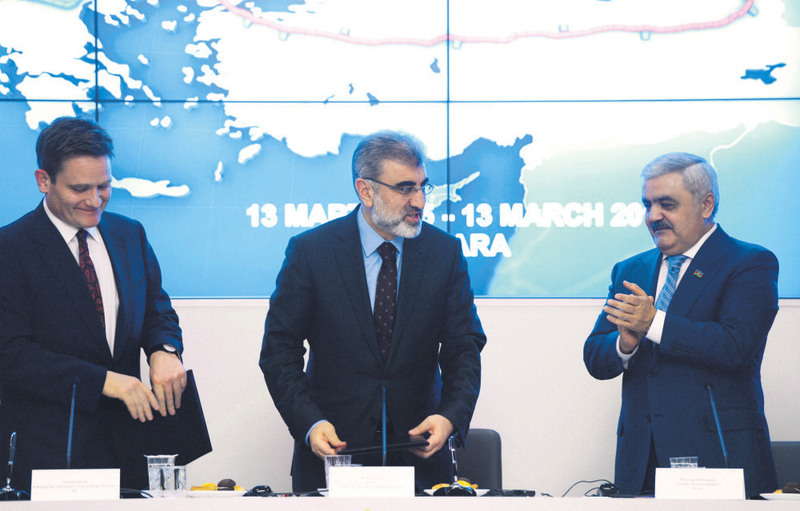 Regional chairman of BP Birell (L), Energy Minister Yu0131ldu0131z (middle), Chairman of the Board of SOCAR Abdullayev (R) and attended the partnerhip agreement signing ceremony at the ministry in Ankara on Friday.
by Daily Sabah Mar 14, 2015 12:00 am

Azeri natural gas will be transferred Şah Deniz on the Caspian Sea to Europe via Turkey by Turkey's BOTAŞ, Azeri SOCAR and multinational BP according to a deal signed despite political threats for economic benefits

A partnership deal for the Trans-Anatolian Natural Gas Pipeline (TANAP) project, which will carry Azeri natural gas to the European market, was signed on Friday. Turkey's Petroleum Pipeline Corporation (BOTAŞ) together with the Azeri Petrol Company (SOCAR) and the multinational oil company BP signed a partnership agreement for TANAP. According to the partnership agreement, 58 percent of the TANAP project belongs to SOCAR, while BP's share is 12 percent and BOTAŞ's 30 percent.

Speaking at the ministry, Energy and Natural Resources Minister Taner Yıldız said that TANAP, which is being constructed to transfer natural gas from Şah Deniz on the Caspian Sea to Europe via Turkey, has evolved under political threats for economic benefits, and that while natural gas prices are also declining in line with decreasing crude oil prices, they have not given up on the project. He also underlined that while some companies have suspended their energy investments, many obstacles that were encountered during the project were not economic but political, but still, they did not succeed. Yıldız pointed out that they trust TANAP's project partners, SOCAR and BP, and that both the threats and opportunities related to such mega projects would never stop. "We will implement the project that will cross through 20 cities without harming the local fauna," added Yıldız. The opening ceremony for TANAP will take place on March 17 in Kars with the attendance of the presidents of Turkey and Azerbaijan. The project is of the utmost importance for providing natural gas to European counties, and according to Yıldız, it has a very busy and fast schedule.

Yıldız further noted that while TANAP might not be completely independently of crude oil markets, it is strategic enough to minimize adverse effects. He further noted that he is hoping to transmit natural gas from the Şah Deniz 2 Project to Europe and Turkey. He noted that Turkey has increased its shares in Şah Deniz and the Caspian Sea, and is preparing the grounds for the 2040s and 2050s.

BP Regional Director for Azerbaijan, Georgia and Turkey Gordon Birell stated that Turkey is a strategic partner of BP and that Turkey has become an energy hub in the last five to 10 years. "Becoming partners in the TANAP project is a major step for us. TANAP is also an important opportunity for the security of energy supply in Turkey," said Birell.

BOTAŞ Assistant General Director Mehmet Konuk noted that TANAP would provide most of the natural gas required for Turkey and Europe and contribute to the security of energy supply in Turkey. He further noted that they have increased BOTAŞ's share in the project to 30 percent.

Turkish Stream is not alternative to TANAP

The energy minister replied to reporters' questions after the signing ceremony. On whether the Turkish Stream Project currently being discussed with Russia can be an alternative to TANAP, Yıldız said that Turkey has the capacity to undertake both projects simultaneously and that these two projects were not in competition.

Noting that since the cancellation of the South Stream Project by Russian President Vladimir Putin in December during his visit to Ankara, both parties have been considering the Turkish Stream Project and while working on that one, Yıldız noted that along with having shares in TANAP, Turkey has also increased its shares in Şah Deniz on a field of 468 kilometers. "TANAP is our asset. We cannot politically create a competitor to it," said Yıldız, adding that such projects will highlight the political stability achieved in Turkey.

With regard to the cancellation of the Nabucco Project, which was a proposed natural gas pipeline from the Turkish-Bulgarian border to Austria and planned before TANAP, Yıldız said that Turkey had not lost anything, but north European countries had and that TANAP is a good replacement for the Nabucco Project. Yıldız brought up the views of Hungarian President Janos Ader during his visit to Turkey on energy and said that Hungary wants to procure gas through Greece, Macedonia and Serbia. "We are now in a phase where both countries will follow the developments together," added Yıldız.

He also noted that discussions have been held concerning an offer to be submitted for a plant in Afşin-Elbistan with Qatar and underlined the importance of developing projects related to crude oil, natural gas and coal together.