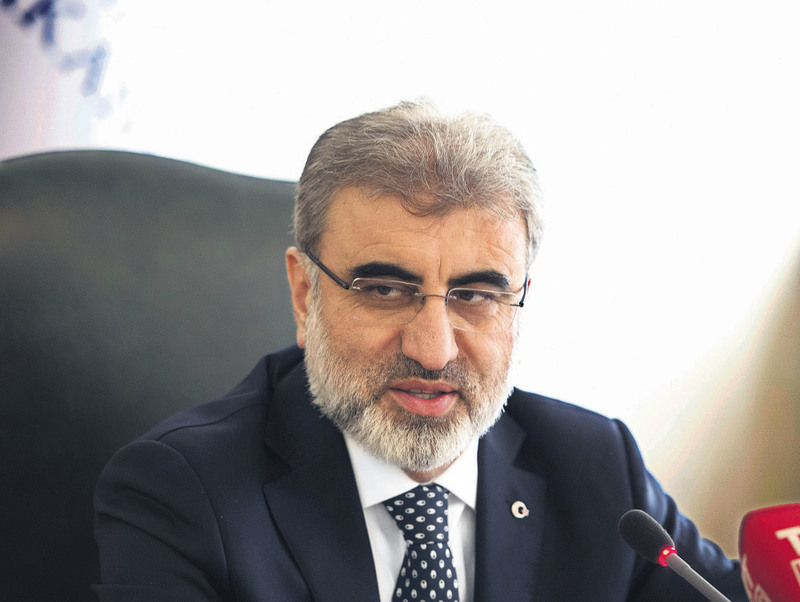 Energy and Natural Resources Minister Taner Yu0131ldu0131z held a press conference yesterday, in which he commented on issues related to the country's energy agenda.
by Daily Sabah with AA Mar 27, 2015 12:00 am

Once peace is reached after 30 years of terrorist attacks in eastern part of Turkey, the country will search for oil in the Qandil Mountains and hopes to increase the quantity of oil produced in Baghdad

The reconciliation process is permitting Turkey to explore for oil in northern Iraq, Energy and Natural Resources Minister Taner Yıldız said yesterday. Turkey's reconciliation process is a government effort launched two years ago to bring an end to the decades-long conflict with the PKK. The PKK is listed as a terrorist organization by Turkey, the U.S., EU and NATO. The PKK has fought for an independent Kurdish state since 1984 and its terrorist attacks have claimed around 36,000 lives in Turkey. Turkey could not work previously in northern Iraq because of the terrorist actions of the PKK. "Now, if the Qandil Mountains [where PKK headquarters is located] in northern Iraq are clear of the conflict, we will explore for oil there," Yıldız said.

"We made agreements 15 to 16 months ago with Baghdad and [the Kurdistan Regional Government - KRG - in] northern Iraq to explore for oil in the Hindirin and Coman fields near the Qandil Mountains at the end of next year," Yıldız said. According to Yıldız, the government made the agreements a long time ago so that Turkey would be ready after the reconciliation process.

"There is speculation and questions about sharing the oil that we may discover in northern Iraq with the PKK. We shared a lot of troubles with them. From now on we will never share anything. We don't have to share anything with them. We have a deal with Iraq and we are developing it," Yıldız said. He said that Turkey has 11 oil fields in northern Iraq including the Hindirin and Coman fields.

"Turkey has fields and agreements with [the KRG in] northern Iraq. When ISIS [the Islamic State of Iraq and al-Sham] leave the area, we will have a chance to bring it to the forefront," he added. Yıldız stressed that the projects may be delayed if Turkey loses its political stability. "We could have 318,000 barrels of oil from those fields, however, because of the PKK we couldn't do it," Yıldız said.

Touching on oil work in Iraq, Yıldız said that after the system was set up, 47 million barrels of oil have been dispatched on 57 tankers, which means a turnover of around $3 billion. Yıldız also said that they are conducting joint work with the Turkish Petroleum International Company (TPIC) and BP in Iraq's Rumaila oil field and that they aim to reach a daily oil production of 200,000 barrels there as part of the oil agreement with Baghdad.

Turkey will not be the owner of 200,000 barrels of oil to be produced there, Yıldız said, explaining that the oil is produced as a part of a service agreement, which means that Turkey takes $3 to $3.5 from one barrel of crude oil that is sold for $58. "This is a contribution to the normalization of Iraq," Yıldız said, continuing that they attach great importance to the normalization and stabilization of Iraq and Syria as neighboring countries.

Touching on the Cizre-Mosul electric line, Yıldız said that once a 15-kilometer part of this line is completed, Turkey can share its surplus electricity with Iraq.

In reference to the final situation of the Akkuyu nuclear power plant, Yıldız said that Russia's revenues have dropped within the last year both because of the decline in crude oil prices and the depreciation of the ruble. "Russia allocated 50 billion rubles from its public budget. There has been a decline in the amount of dollars because of the depreciation of the ruble to the dollar. So far, $3.1 billion has flowed into Turkey only for the Akkuyu nuclear power plant. This money is held in the bank, which was jointly bought with Russia, and is being used," Yıldız said. According to Yıldız, the tender of port will be held next month and then its foundations will be laid. He said that this is a business of around $700 million to $800 million and that they are making an effort not to have any delays in the schedule. "Nuclear power plants are great projects that both have threats and opportunities," he said.

Holding a press conference with the newly elected executive director of the International Energy Agency (IEA), Fatih Birol, Energy and Natural Resources Minister Taner Yıldız said that natural gas prices have dropped on the dollar basis, but have not fallen in terms of cost in Turkish lira. The disparity stems from the fact that natural gas is bought in dollars and sold in lira and will not be reflected in the prices in the country, Yıldız said, adding that the rise of the dollar against the lira has reached around 17 percent, which means increasing natural gas prices by a further 6 percent, although they will not implement this hike.

Yıldız said that only through the huge amount of money provided from energy saving will Turkey be able to reach the desired economic level in 2023 and be able to finance three Bosporus bridges.

Birol said that the world is witnessing an unprecedented time in terms of the great extent of the intertwining of geopolitics and energy, adding that the current comfort in markets and low prices might be temporary. This comfort might be followed by the emergence of the energy supply as a more important matter, he said.

Underlining that all oil producing countries in the Middle East, including Iraq, Libya, Syria and Yemen, are experiencing serious problems, Birol remarked that energy security has become an even more important issue. Saying that the decline in oil prices stems from the upsurge in the U.S.'s oil production, he said that the relative decline in oil prices should not let us feel extremely comfortable.

According to Birol, the ISIS crisis in Iraq is not a problem that will end soon. He said that the IEA is paying great attention to the security of the energy supply in a time when the Middle East is experiencing serious structural problems that are sure to continue for a while.
Last Update: Mar 27, 2015 10:22 am
RELATED TOPICS