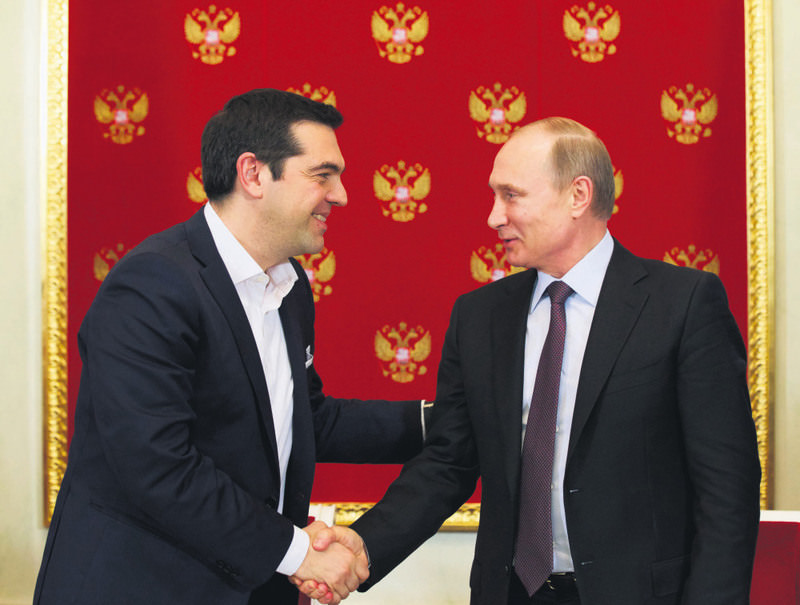 Greek Prime Minister Tsipras (L) shakes hands with Russian President Putin during a signing ceremony at the Kremlin in Moscow on Wednesday.
by Şeyma Eraz Apr 10, 2015 12:00 am

The Russian offer for a new natural gas pipeline through Turkey and Greece has been convincing for Greece, which is currently dealing with economic struggles. Now, however, Greeks and Turks have a new naming conflict

Greece has critical decisions to make according to Energy and Natural Resources Minister Taner Yıldız. During his meeting with Russian President Vladimir Putin on Wednesday, Greek Prime Minister Alexis Tsipras said Greece would gladly build a pipeline to transport natural gas from the Turkish-Greek border. After the cancellation of the South Stream pipeline project in December, which was supposed to carry Russian natural gas to Europe via Bulgaria, the question of how gas would be transported became a Russian puzzle to be solved by the countries that became involved in the project as well as the ones that were excluded.

The project was created to find alternative ways to cover Europe's natural gas needs by transporting Russian natural gas to Europe through pipelines laid under the Black Sea over Bulgaria to Hungary, Serbia, Austria and Slovenia. The project, which aims to be completed in 2020, is intended to carry about 63 billion cubic meters of natural gas to Eastern and Central Europe.

Putin said, "The new route will provide for European fuel needs and would allow Greece to become one of the main power distribution centers on the continent, which could help attract significant investment into the Greek economy," at a joint press meeting with Tsipras.

The new route, currently called the Turkish Stream by Russian authorities, is planned to pass through Turkey and extend to the Turkish-Greek border. Russian gas giant Gazprom's CEO Alexey Miller said the EU has a few years to construct the necessary infrastructure to transport gas to the Greek-Turkish border.

For now, Turkey seems to prefer staying out of the discussions. Yıldız said yesterday that Greece has critical decisions to make concerning the Trans Adriatic Pipeline (TAP) - which will connect Western Europe to natural gas via a pipeline extending from Greece to Italy via Albania - as well as the Turkish Stream project.

EU Affairs Minister and Chief Negotiator Volkan Bozkır also commented on the subject, reiterating that Turkish Stream will be composed of three pipelines. "One will only be used for Turkey's internal needs, but the fate of the other two will depend on the interest of the EU," Bozkır told Anadolu Agency. "Standing at a crossroads between major energy producers and consumer markets, Turkey is not only an end market, but has also established itself as a reliable transit country, offering a short, secure and sustainable route for the energy resources of its energy-rich neighborhood."

Tsipras showed his interest in the project, commenting, "Our pipelines will receive gas from the Turkish border and will provide energy security for both Greece and the European market."

Meanwhile, Greece is trying to escape its recession, and is currently working on reform plans to solve its economic problems. The Turkish Stream is expected to carry 63 million cubic meters of natural gas annually, and planning works are ongoing.

Greece's Tsipras in favor of Turkish Stream, but not the name

First yogurt, then meat pasty and now Turkish Stream - with common historical backgrounds and certain cultural similarities, Turkey and Greece often have difficulty deciding what belongs to whom, such as traditional foods.

Likewise, Tsipras said Greece would gladly participate in the Turkish Stream pipeline project as long as the project's name is called the Greek Stream when the pipeline is in Greek territory.

"We may not accept that the Greek segment of the pipeline is called Turkish Stream, but we believe this pipeline will upgrade our relations with Turkey. In that sense, we are ready to study the financing possibilities, always respecting the framework set by our membership in the European Union and, of course, the Greek framework," Tsipras said, adding that Greece and Russia will discuss the project in detail in the near future. He said the project could earn Greece "millions of euros" every year, and that Athens' Western creditors would also benefit should the Greek economy improve as a result of closer economic cooperation between the EU member state and Russia.

Putin said that Greece's participation in the Turkish Stream gas pipeline project was possible, but any decisions would depend on the technical details. The European Commission, the EU's regulatory arm, is currently analyzing the Turkish Stream plan for its "economic viability as well as regulatory and legal feasibility and consequences."
Last Update: Apr 10, 2015 10:58 am
RELATED TOPICS