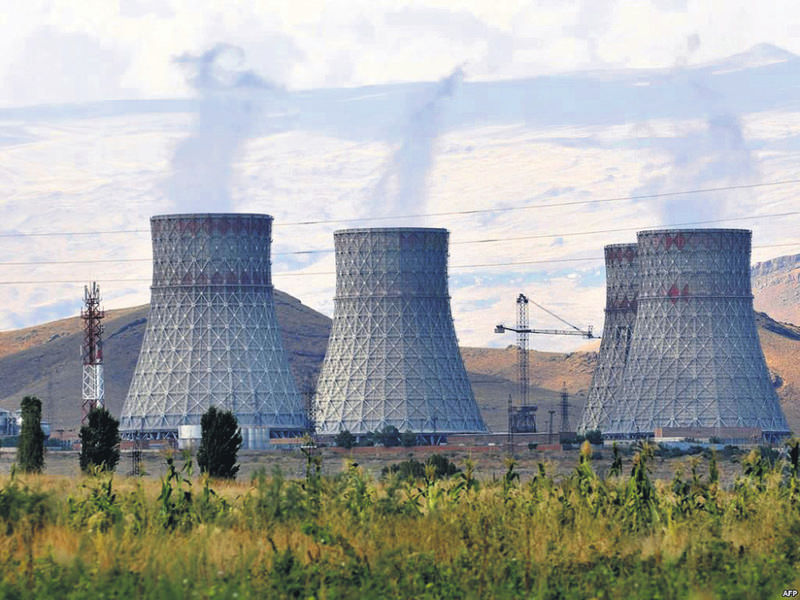 by Ali Ünal May 07, 2015 12:00 am
Armenia announced on Tuesday an extension of the lifespan of the country's sole nuclear plant, the Metsamor Nuclear Power Plant, until 2026, which was built during the 1970s, but was closed following a devastating earthquake in 1988.

Speaking about Armenia's decision to keep the outdated nuclear plant going, which is only 16 kilometers from the Turkish border, Energy and Natural Resources Minister Taner Yıldız said Turkey cannot accept the fact that they wish to operate it in its current condition just across the Turkish border simply because Armenia has energy needs. "Turkey took several steps to oppose the operation of Metsamor Nuclear Power Plant just after the Armenian decision [was announced]," Yıldız said at the opening ceremony of the 21st International Energy and Environment Fair and Conference in Istanbul on May 6.

A call to shut down the Metsamor plant, which is located in a seismically-active zone, has been repeatedly made by the EU, Council of Europe (CoE) and the U.S. Following the Spitak earthquake in 1988, Metsamor was closed. However, in spite of widespread international protests, it was reactivated in 1995. Armenia rejected the EU's call to shut down Metsamor by 2011 at the latest, as well as its offer of 200 million euros to help meet the country's energy needs.

In the event of a major incident at Metsamor, the effects would inevitably be felt in Armenia, Turkey, Georgia and Azerbaijan, as well as other countries in the Middle East. In the worst case scenario, not only the region but also large parts of Europe would be affected.

While the official lifespan of Metsamor expired in 2010, Armenian and International Atomic Energy Agency (IAEA) experts have agreed that the plant can remain operational until 2016. The authorities in Yerevan formally agreed in 2007 to close the Metsamor plant after several years of pressure from the U.S. and the EU, which claim it to be inherently unsafe and are promoting the idea of building a brand new facility. Meanwhile, Russia and Armenia signed a cooperation agreement to extend the life of the second unit of the nuclear power plant until 2026 in December last year. As part of the agreement, Russia will lend $270 million to Armenia and provide a $30 million grant.
Last Update: May 08, 2015 10:44 am
RELATED TOPICS