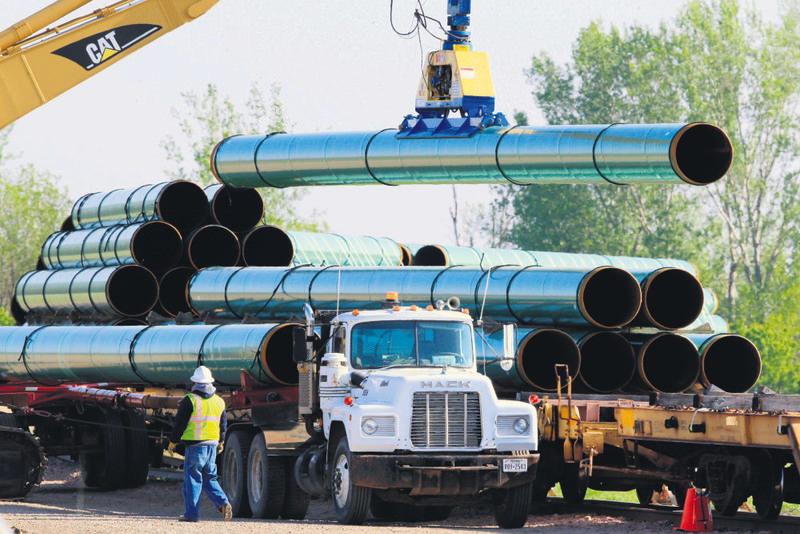 The biggest issue concerning the energy market is not reaching the source, as it is important to define the way a product is commercialized say experts.
by Şeyma Eraz May 25, 2015 12:00 am

While peace talks are in progress between the Turkish and Greek parts of Cyprus, energy conflicts have become a priority issue in the discussions. President Erdoğan proposed the Iraqi model to transfer energy sources of the island to international markets

President Recep Tayyip Erdoğan said the government will not renounce any of the policies regarding energy resources of Turkish Cyprus and the island in general. Speaking at the sixth World Energy Regulation Forum in Istanbul on Monday, Erdoğan said the government had previously emphasized that any kind of energy resources discovered on or around the island belongs to all citizens on the island, and utilizing and delivering any resources to international markets should be performed through Turkey like the model implemented in Iraq.

Erdoğan said Turkey should be a part of any cooperation agreements regarding energy, as it is located in the center of the East-West and North-South energy corridors. He also stressed that problems regarding energy can only be resolved solidly and permanently with international cooperation and improved dialogue between producers, consumers and transit countries.

According to the deal that was reached in January after a months-long impasse between Iraq's central government and the Kurdistan Regional Government (KRG), the KRG ceded 550,000 barrels of oil per day to the Iraqi oil ministry, more than half of which will come from the disputed Kirkuk oil fields. In exchange, the Kurds will receive a 17 percent share of the national budget allocated to their region with oil will being transferred to international markets via the southern Turkish port of Ceyhan.

As energy is the cause of wars when underground and peace when aboveground, Erdoğan said the requirement to market any type of energy including secure and regular delivery to consumer countries requires a peaceful environment that can only be achieved through international contracts and cooperation. He added that with a disciplined foreign policy and stable administrative approach, Turkey will continue to be a safe bridge between countries with energy resources and consumer markets.

Speaking to Daily Sabah, economist Erdal Tanas Karagöl said the biggest issue concerning the energy market is not reaching the source, as it is important to define the way a product is commercialized. "Transferring Cyprus's energy without Turkey is not rational. Political conflicts on Cyprus will only be solved by addressing energy issues," Karagöl said, adding that Turkey is a natural corridor for the energy resources of countries like Turkmenistan, Iran and Iraq, and it will be a corridor for the Mediterranean's resources as well.

Erdoğan said energy resources on and around Cyprus, which will have a major role in shaping the energy map of the Eastern Mediterranean region, are an important part of Turkey's energy diplomacy. He also stressed that Turkey will benefit from an energy agreement between the two sides just like in Iraq. "As we have always been positive a solution will be found as well as one step ahead, we will continue to act in the same manner regarding energy issues of the entirety of Cyprus," Erdoğan said

Erdoğan underscored that Turkey is no longer struggling to meet its internal energy demand like it was 12 years ago, but now it is contributing to energy supply security with cooperation between European countries and other allies and sister countries. Reiterating that the Baku-Tbilisi-Ceyhan Crude Oil Pipeline and the Baku-Tbilisi-Erzurum Natural Gas Pipeline have been realized within the last 12 years, Erdoğan said the foundations of the Southern Gas Corridor were laid last year in Baku in order to increase the safety and security of energy supply and offer variety in terms of resources and routes. "As a part of this project, we have also laid the foundations of the Trans-Anatolian Natural Gas Pipeline [TANAP] project together with Azerbaijan in Kars in March. Hopefully, gas will start flowing in 2018, and we will continue to increase energy collaboration in each region of Iraq as well," Erdoğan added.

Indicating that Turkey has been taking advantage of its geopolitical location vis-à-vis current regional issues and global dynamics, Erdoğan said one of the major issues for the energy sector as a whole is Turkey's delayed EU membership. "Despite this, we will continue our support and work to ensure competitive and free energy markets. As a country, we will continue to positively contribute to any kind of issue related to regional and global welfare, stability, peace and energy supply security," Erdoğan said.

Meanwhile, Saturday's meeting of the leaders of the Greek and Turkish parts of Cyprus has raised hopes for the success of peace talks. The two presidents strolled through Nicosia on Saturday and drank coffee together, demonstrating their intent on improving relations on the divided island after the start of a new round of peace talks this month.

However, in terms of energy resources, the amount of resources Cyprus has is unclear. In January, French energy giant Total said a search for oil and gas off the coast of Cyprus failed to find any potential fields to warrant drilling.

President Recep Tayyip Erdoğan on Monday said that the biggest lesson that needs to be learned from the Islamic State of Iraq and al-Sham's (ISIS) attacks in Syria is that problems in the Middle East are not local, isolated, regional problems, but global problems. He said that along with the safety of borders and energy supplies, initiatives should be taken in order to preserve global welfare, peace and solidarity. "We have to take immediate measures in order to put an end to the tragedy in the area and to stop the bloodshed," said Erdoğan. "Such cruelty has no place in the 21st century."

Currently various crude oil wells are occupied by ISIS, prompting the president to say that ISIS is gaining an unfair competitive advantage, and overthrowing any kind of rules as well as using the benefits and money it gains from these wells for purchasing weapons to use in the slaughter of many people.

Erdoğan also highlighted that, considering that everyone is a human being regardless of their origins and race, the global economy cannot be prosperous or stable, nor can global peace and security of energy resources be established without ensuring global justice, wealth distribution and cooperation. He also said that ISIS, which he said grew as a result of the Assad regime in Syria, is an example of the need for global security and peace, claiming that ISIS's barbarity is not only felt in Syria and Iraq, but it has affected more than 80 countries in the world. "If no measures are taken against stopping the terror of ISIS as soon as possible, it will be hard to endure and eliminate the consequences in the long term," he said.
Last Update: May 25, 2015 11:43 pm
RELATED TOPICS