Erdoğan and Putin meet in Baku, focus on Syria and energy 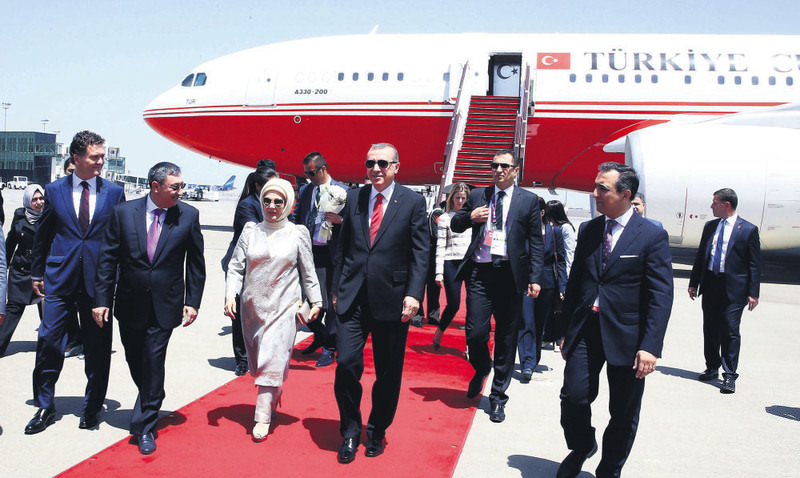 President Erdoğan arrived in Baku to attend the European Games opening ceremony, where he will also meet with his Russian counterpart to discuss the situation in Syria as well as energy deals

President Recep Tayyip Erdoğan paid a two-day visit to Baku on Thursday in his first visit abroad after the general election held on June 7. The main reason for the president's visit was to support Azerbaijan hosting the European Games, which is being held for the first time. On the other hand, Erdoğan held meetings with his Azeri and Turkmen counterparts, and was expected to meet with Russian President Vladimir Putin on Friday, after Daily Sabah went to print. Although the visit to Baku was initially planned to be a one-day trip, Erdoğan extended his visit one more day to meet with Putin to discuss the situation in Syria as well as energy deals.

Erdoğan arrived in Baku on Thursday evening and attended the dinner given in honor of heads of states by Azerbaijani President Ilham Aliyev and his wife. After the dinner, Erdoğan held bilateral talks with Azerbaijani President Ilham Aliyev and Turkmen President Gurbanguly Berdimuhamedow. Then, he watched the opening ceremony of the 2015 European Games at night. Erdoğan's planned meeting with Putin was crucial, as it would be the first meeting after Putin used the word "genocide" for the so-called Armenian incidents in 1915. However, the two countries did not let the political conflict block their economic benefit and continued to work on possible energy projects. Russia released a statement shortly before the meeting stating that the matters to be discussed in the meeting included the situation in Syria, economic relations and energy issues. Turkish Energy and Natural Resources Minister Taner Yıldız also accompanied Erdoğan in Baku, having declared before the visit that negotiations would be conducted regarding the Turkish Stream pipeline project, which will transfer Russian natural gas to Europe via Turkey. Since the South Stream project had been scrapped by Putin during his visit to Ankara in December, the two leaders' talks are being closely followed by European officials, since the mentioned natural gas projects are to cover European needs.

Yıldız also said before the visit, that one of the most significant issues to be discussed with Russia concerned opening price negotiations for natural gas. Turkey is looking to decrease the price of gas bought from Russia by 10.25 percent compared to the current price. Erdoğan and Putin are expected to discuss the issue of Syria in detail as well. The two leaders are going to talk about a resolution in Syria where the Islamic State of Iraq and al-sham (ISIS) has seized a significant amount of territory.
Last Update: Jun 12, 2015 11:45 pm
RELATED TOPICS