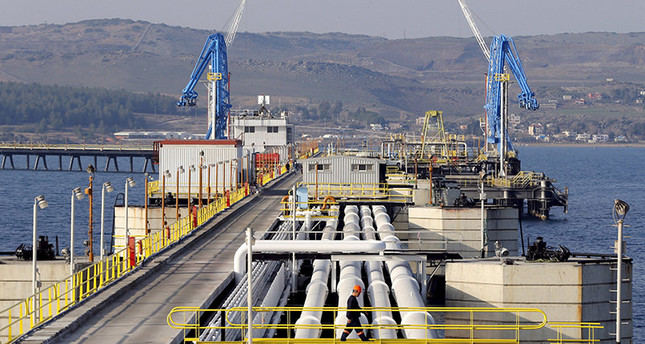 by Daily Sabah Oct 07, 2015 12:00 am
The Kurdistan Regional Government's (KRG) oil exports through Turkey rose by 31 percent in September compared to the previous month, the KRG's Ministry of Natural Resources data revealed Tuesday. The KRG in Irbil exported 18.6 million barrels of crude oil, an average of 620,478 barrels per day (bpd), in the month of September through its pipeline to Ceyhan port in southern Turkey. In August the KRG exported 14.6 million barrels of crude oil, an average of 472,832 bpd. However, during that month there were nine days of downtime for the pipeline, due to sabotage and theft, whereas in September there was only two days of downtime.

According to a deal between the two sides reached on Dec. 2, 2014, Baghdad was to send Irbil a 17 percent share, around $17 billion a year from the federal budget. In return, Erbil agreed to export 300,000 barrels of oil per day from Kirkuk, and 250,000 barrels of oil per day from northern Iraq, under the supervision of Baghdad's oil marketing company, SOMO. Although, Irbil had announced in June that it will stop exporting oil through SOMO, in August the KRG supplied SOMO in Ceyhan with 1.6 million barrels of crude, or an average of 50,936 bpd. However, in September, the KRG's ministry of natural resources said the government "continued to increase its direct oil sales in Ceyhan to compensate the region for the budget shortfalls from the federal government in Baghdad," and no oil was delivered to SOMO in Ceyhan.
RELATED TOPICS