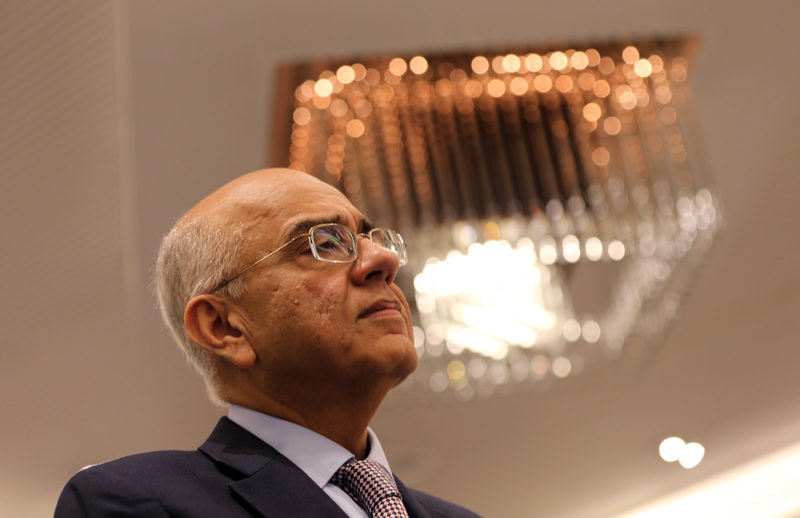 Director of the IMF's Middle East and Central Asia Department, Masood Ahmed, talks to The Associated Press at the Dubai International Financial Center, Wednesday.
by Associated Press Oct 22, 2015 12:00 am

Growth in the Middle East has been suppressed by the significant decline in oil prices as well as the chaotic atmosphere in the region, evoking concerns about the average growth rate of 2.5 percent this year

The International Monetary Fund said Wednesday a fall in oil prices and deepening turmoil in parts of the Middle East will keep growth in the region subdued this year at 2.5 percent. Masood Ahmed, IMF director of the Middle East and Central Asia, said oil-exporting countries are facing tough choices as they brace for a $360 billion drop in revenues this year due to a drop in oil prices globally.

Among the hardest-hit countries by the drop in prices is the world's largest oil exporter, Saudi Arabia. The price of oilthe backbone of Saudi Arabia's economy has fallen by about half since mid-2014. About 90 percent of the government's revenue comes from oil.

The IMF estimates Saudi Arabia will post a budget deficit of more than 20 percent of gross domestic product this year, amounting to between $100 billion to $150 billion. The IMF's Middle East economic outlook report launched Wednesday said reforms in Gulf Arab countries that create more jobs and diversify economies outside of the oil sector are "all the more urgent."

"There are difficult decisions that will need to be made in terms of cutting spending," Ahmed told The Associated Press in an interview on the sidelines of the report's launch in Dubai. "You could try to postpone some capital projects ... you could look at energy prices, which are still subsidized or below international prices in most of the countries in the region." Ahmed said the six oil-exporting countries of the Gulf Cooperation Council could gain $70 billion if they raised local energy prices to international market rates.

This year, the United Arab Emirates slashed gasoline subsidies, but the decision to hike prices in a country where the majority of residents are foreigners was likely less challenging than it will be for other GCC countries. More sensitive and difficult changes recommended by the IMF include reigning back spending on the public sector wage bill, which employs most Gulf citizens.

Meanwhile, the GCC countries of Saudi Arabia, the UAE, Qatar, Kuwait, Oman and Bahrain will need to create two million jobs in the next five years to accommodate their large young population and keep unemployment levels from rising.

War-wracked countries like Syria, Libya and Yemen continue to be the most devastated economically in the region. Neighboring countries like Jordan and Lebanon hosting refugees are also facing sustained economic pressures. Iraq's oil exports have allowed its economy to stay afloat, but it is stagnating, Ahmed said.

Libya and Yemen have lost a quarter of their GDP due to conflict and instability in the aftermath of the Arab Spring. Syria's economy has shrunk by half since the start of its civil war in 2011. "If the war stops tomorrow in Syria and if they grow every year at 3 percent thereafter it will still be 20 more years, so a whole generation after 2010, before they get back to the level of income that they had before the war," Ahmed said.

Iran's prospects, meanwhile, are expected to improve with growth reaching at least 4 percent in the medium term through increased trade and investment with the easing of international sanctions. Ahmed said Iran's economy will not undergo an immediate transformation, but sectors like tourism and the automobile industry can be strengthened to attract and sustain international investor interest. The IMF said oil importers like Egypt, Morocco and Pakistan are expected to see growth of more than 4 percent this year in part due to reforms to the business environment.
RELATED TOPICS