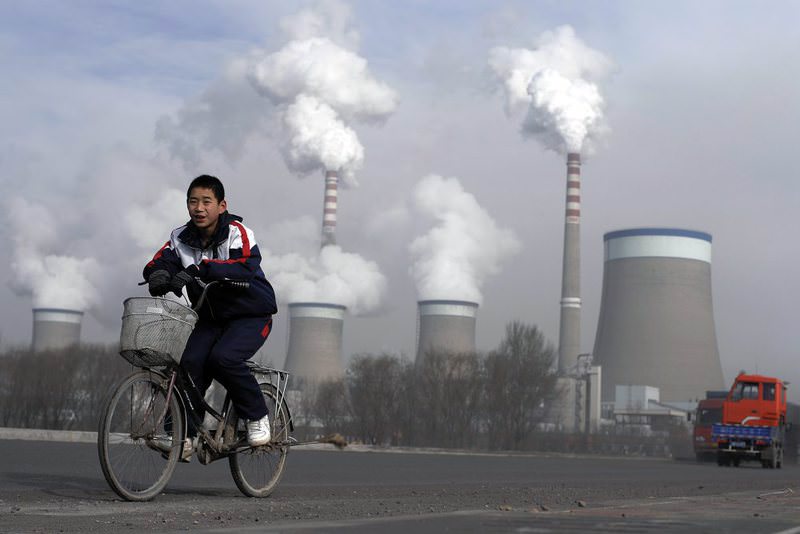 A Chinese boy cycles past cooling towers of a coal-fired power plant in Dadong, Shanxi province, China.
by reuters
Nov 06, 2015 12:00 am

While G20 leaders will meet in November in Turkey, an international report estimated that new energy efficiency measures could cut annual greenhouse gas emissions by a tenth by 2030

Tougher energy efficiency standards ranging from cars to fridges could cut annual world greenhouse gas emissions by about a tenth by 2030 while also spurring economic growth, an international report said. The study by the Global Commission on the Economy and Climate, urged the Group of 20 to do more to improve the energy use of vehicles, buildings, factories, power plants and household appliances as a way to limit global warming. The Commission, led by former heads of government, business leaders, economists and other experts, argues that measures to combat climate change can help lift economic growth, rather than depress it as many governments fear. "Energy efficiency really contributes economically and it is also important in terms of climate change," Russell Bishop, who led the study that included everything from lightbulbs to building insulation, told Reuters. The report estimated that new voluntary energy efficiency measures, that could vary by country, could cut annual greenhouse gas emissions by the equivalent of between 4.5 and 6.9 billion tons of carbon dioxide by 2030. By contrast, annual world greenhouse gas emissions are now around the equivalent of 50 billion tons of carbon dioxide, according to the U.N.'s panel of climate scientists. Group of 20 leaders will meet in mid-November in Turkey, while almost 200 nations will meet in Paris from Nov. 30-Dec. 11 to try to agree measures to rein in global warming. The United Nations says government plans so far are too weak to limit warming to a U.N. target of 2 degrees Celsius (3.6 Fahrenheit) over pre-industrial times to limit extinctions of animals and plants, droughts, floods and rising sea levels.

Energy efficiency could fill a big part of the gap to get towards 2C, along with a stronger shift to cleaner wind and solar power from fossil fuels, Bishop said. The International Energy Agency has estimated that investments in energy efficiency could boost cumulative economic output by $18 billion by 2035. Some measures, such as insulating home roofs in cold climates, quickly pay for themselves via lower heating bills.

Such savings can free up cash for more productive investments, lifting growth, and also reduce harmful air pollution from burning fossil fuels. Bishop said that improved efficiency measures should not be too ambitious and should avoid choking industry with red tape. Volkswagen's cheating on emissions data from diesel engines highlighted a need for proper oversight, he said.

Meanwhile, renewable energy supply in eight major economies will collectively more than double by 2030 due to new national climate and energy plans, according to a study

These economies are among many which have announced new renewables targets in the past 12 months ahead of a United Nations' climate conference in Paris from Nov. 30 to Dec. 11 to fight global warming from 2020. Canada and Russia, which are also among the world's top 10 emitting countries, were not included in the study because they have not announced post-2020 renewable energy targets. So far, plans submitted to the U.N. by around 150 countries to cut greenhouse gases will only slow climate change and not limit rising global temperatures to two degrees Celsius, a threshold seen by scientists as avoiding the worst effects of climate change.