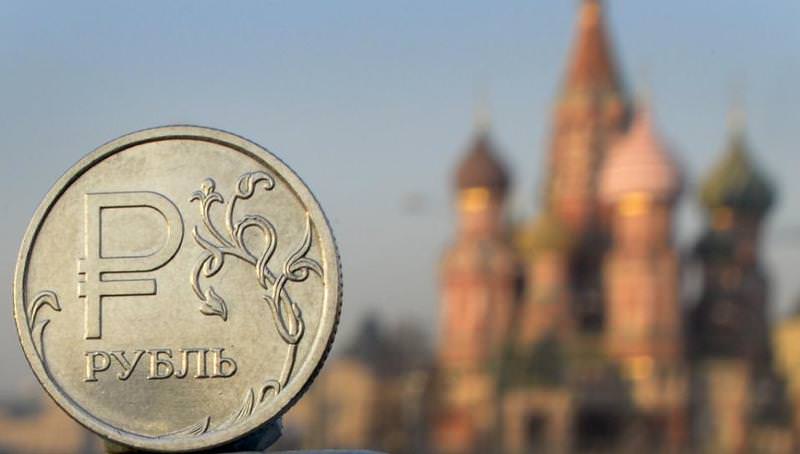 by Daily Sabah Dec 08, 2015 12:00 am
The Russian ruble fell to its lowest against the dollar in three months on Monday as oil prices dropped upon OPEC's decision to abandon output limits.

The currency, traded as low as 69.50 which is its weakest level since Aug. 25, weakened 1 percent to 68.8460 against the dollar by 5:50 p.m. in Moscow as the country's main export blend, Brent crude, retreated 2.1 percent to $42.08 a barrel. Oil producers are now doing "whatever they want," Iranian Oil Minister Bijan Namdar Zanganeh said, citing OPEC's decision not to cut production.

Oil prices sank to their lowest level since early 2009 in New York trade earlier on the same day as markets continue to reel from OPEC's refusal last week to cut back production.

The January contract for West Texas Intermediate crude sank $2.47 to $37.48 a barrel in midday trade before pulling back to $37.63.

That was the lowest level since February 2009, and followed a similar plunge in London trade early Monday that took the Brent crude benchmark to an almost seven-year low of $41.05.

OPEC's decision to abandon oil production limits will make it harder to strenghten the Russian currency without sacrificing budget revenue that Russia generates from the sales of dollar-denominated natural gas and oil. Russia's fragile economy concerns officials, as Elvira Nabiullina, the head of the Russian Central Bank said in a statement last month that lower crude oil prices means dwindling funds for Russia.

Exporting economies like Russia are hurt by lower crude oil prices and, the country also has no assurances for growth in the next decade, Economic Development Minister Alexey Ulyukayev said Monday in an interview published on Vedemosti.

Russia, a country that relies on energy export for nearly half of its budget revenue, and the world's biggest oil and natural gas exporter, remains in "very bad shape," Russian minister said.

Russian economy based on natural gas and oil export has also been affected by the rising tensions with Turkey after two Turkish F-16 fighter jets on an aerial patrol intercepted last month an unidentified warplane -which later turned out to be a Russian SU-24 jet- within rules of engagement when it intruded into Turkish airspace on the Turkey-Syria border.

"We may suspend work on some major projects agreed with Turkey. It includes a five-year bilateral program from 2016 to 2020 under an agreement on free trade in services and investment, trade-economic and scientific-technical cooperation agreement to establish a joint investment fund. All those activities will be stopped," Ulyukayev told Russian television in the wake of the incident.

But the Russian economy cannot replace what Turkey exports, commented Stanislav Tkachenko, professor in the International Relations Department of St. Petersburg State University (Russia) in a note published on Russia Direct on Nov. 26.

"The structure of bilateral trade clearly benefits Russia more than Turkey," Tkachenko wrote. "In 2014, Turkey ranked fifth among Russia's partners in terms of exports ($25 billion of mainly natural gas, metals and agricultural products). At the same time, Russia buys products from Turkey that it needs for its economy (machinery, equipment, textiles, building materials, food) that cannot be replaced overnight with Russian substitutes."

The economic cost of severing ties with Turkey could exceed $30 billion, and for some sectors of the Russian economy (energy, metallurgy) it would be a heavy blow, Tkachenko said. "The fragile shoots of economic growth in Russia, after nearly a year of recession, would be torn out of the ground," he added.
Last Update: Dec 08, 2015 1:41 am
RELATED TOPICS