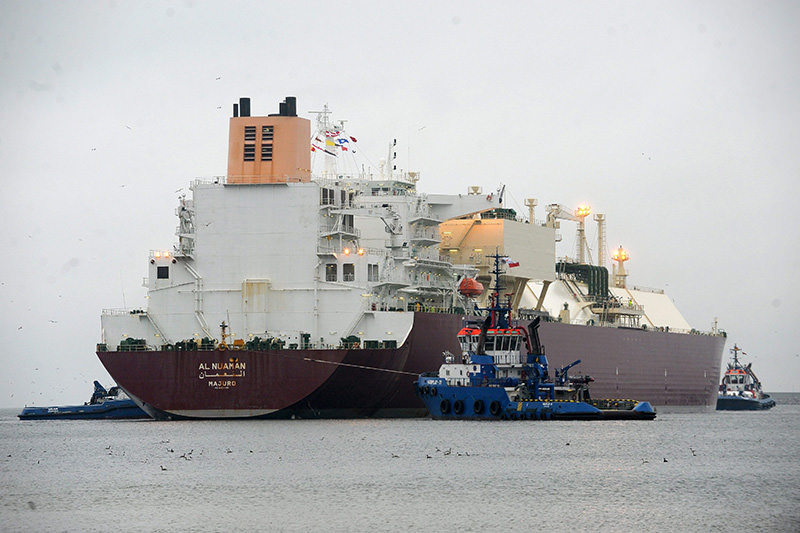 LPG Tanker vessel 'Al Nuaman' with Qatari LNG enters the LNG Terminal Port in Swinoujscie, Poland, 11 Dec 2015 (EPA)
by Daily Sabah Dec 17, 2015 12:00 am
Qatar's Ambassador to Turkey, Salem Mubarak Al-Shafi, said on Thursday that Qatar will stand by Turkey regarding every issue, including energy, reported Anadolu Agency. He reportedly said, "We are ready to provide LNG [liquefied natural gas] to Turkey, a brother country, however much they want."

Al-Shafi reportedly said that Qatar exported 1.2 billion cubic meters of LNG to Turkey last year. Stressing that following the recent visit by President Recep Tayyip Erdoğan's to Doha, the relationships between two countries have further developed, Al-Shafi said, "Turkey is a brother country for us, and we stand by Turkey in every issue including energy."

The ambassador has also discussed Qatar's Middle East policies, saying Turkey and Qatar were in a consensus in this issue. He said, "Especially [regarding policies] in Syria, Yemen, and Libya, we share same views and principles. We are striving for the freedom and stability of people in the region."

"The two countries, Qatar and Turkey, have an honorable standing. Our wish is that a political solution persists and Syrian people are pleased," he added.

Turkey's state-owned energy company, BOTAŞ, signed a preliminary agreement on Dec. 2 with Qatar's national petroleum company to purchase LNG over a long-term period. The agreement, signed during President Erdoğan's visit to the country, foresees the infrastructure for Qatari imports and a terminal to be established in Turkey. Erdoğan was welcomed to the country with an official ceremony by Sheikh Tamim bin Hamad bin Khalifa al-Thani, the eighth and current emir of the state.
Last Update: Dec 17, 2015 1:13 pm
RELATED TOPICS