Landfill gas an alternative to Russian gas, may provide 5 percent of electricity production 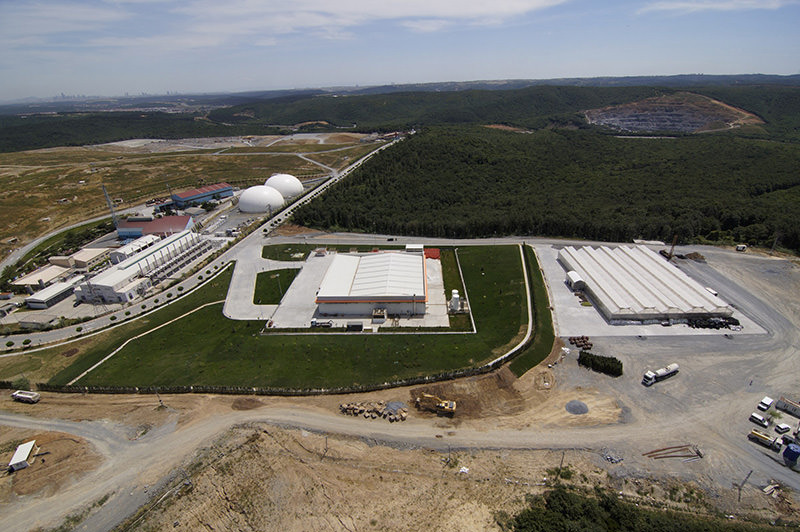 by daily sabah
Dec 29, 2015 12:00 am
While the military jet-downing crisis with Russia pushed Turkey to seek alternative suppliers of oil and natural gas, the country is aiming to diversify its energy production methods to reduce dependency while going green at the same time. Mehmet Gür, CEO of the Ortadoğu Group that operates four landfill gas-to-electricity production plants (LFG) in the northwestern Marmara region, said Turkey can replace up to 5 percent of its electricity production from Russian gas with landfill gas.

Speaking to journalists in a tour to Europe's largest LFG in Istanbul's Kemerburgaz district on Monday, Gür said their four plants, which have a capacity of 58 megawatts, provide the energy demand of up to 266,500 residences. "With the current system, we can provide electricity for up to 1 million residences," he added. These facilities also prevent the uncontrolled generation and buildup of methane gas from landfills, which is one of the main worst greenhouse gasses that leads to global warming. Gür said if all garbage generated in Turkey would be processed in LFG plants, the potential would be 2 billion kilowatt-hours per year. "The energy production in Turkey from landfill gas is around 180 megawatts from more than 20 facilities in 15 provinces. In the first 11 months of 2015, 236 billion kwh of electricity was produced in our country. The share of natural gas in electricity produced in this period was 88 billion kwh. If we accept that 42 billion kwh of electricity was produced with the natural gas coming from Russia and take into consideration all the garbage that could be processed in Turkey, we can generate 5 percent of the electricity generated from Russian gas," Gür said. He stressed that there is an energy production potential of 5.5 billion kwh per year from animal waste and 0.7 billion kwh per year from the sludge in water treatment plants. "It is possible to provide 7 percent of all electricity production by using the biomass potential of our country. However, if we consider that the total installed capacity of biomass plants are around 300 MW, we are at the beginning of biogas and bioenergy," Gür added.

Ata Ceylan, the president of Ortadoğu's energy division, said the use of landfill gas in energy production is an economically and ecologically suitable solution for garbage processing. "The government provides a guarantee of purchase from a base price for those who produce electricity from geothermal, wind, solar, hydro and biomass. Electricity production from landfill gas is being incentivized with 13.3 cents per kwh," he said. Gür added that the incentives should be increased for energy production in small provinces, and it is currently only feasible to establish such facilities in areas with populations of more than 500,000. He also emphasized that Germany alone has 8,000 biogas facilities.

The annual domestic waste exceeds 26 million tons in Turkey, of which 6 million is being produced in Istanbul, Ceylan said, while Gür stressed that 1 kilogram of waste per day is being generated by a single person in Istanbul. Both emphasized the importance of recycling and measures to encourage households to sort out their waste in their homes. Landfill gas is being generated from solid waste disposal sites through vacuuming the methane gas that forms as waste decomposes through wells. LFG can be stored for up to 20 years in order to be used in energy production.
Last Update: Dec 29, 2015 3:34 pm