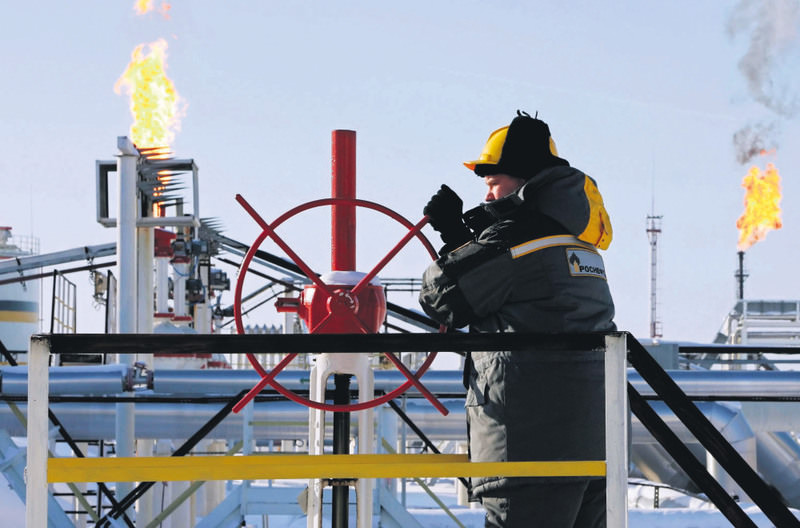 A general view of Yuganskneftegaz pumping station in Priobskoe oilfield some 200 km from Nefteyugansk, Russia.
by reuters Jan 04, 2016 12:00 am

Global oil and gas investments are expected to fall to their lowest in six years in 2016 to $522 billion, following a 22 percent fall to $595 billion in 2015, according to the Oslo-based consultancy Rystad Energy

With crude prices at 11-year lows, the world's biggest oil and gas producers are facing their longest period of investment cuts in decades, but are expected to borrow more to preserve the dividends demanded by investors. At around $37 a barrel, crude prices are well below the $60 firms such as Total, Statoil and BP need to balance their books, a level that has already been sharply reduced over the past 18 months. International oil companies are once again being forced to cut spending, sell assets, shed jobs and delay projects as the oil slump shows no sign of recovery.

U.S. producers Chevron and ConocoPhillips have published plans to slash their 2016 budgets by a quarter. Royal Dutch Shell has also announced a further $5 billion in spending cuts if its planned takeover of BG Group goes ahead. Global oil and gas investments are expected to fall to their lowest in six years in 2016 to $522 billion, following a 22 percent fall to $595 billion in 2015, according to the Oslo-based consultancy Rystad Energy.

"This will be the first time since the 1986 oil price downturn that we see two consecutive years of a decline in investments," Bjoernar Tonhaugen, vice president of oil and gas markets at Rystad Energy, told Reuters.

The activities that survive will be those that offer the best returns. But with the sector's debt to equity ratio at a relatively low level of around 20 percent or below, industry sources say companies will take on even more borrowing to cover the shortfall in revenue in order to protect the level of dividend payouts. Shell has not cut its dividend since 1945, a tradition its present management is not keen to break. The rest of the sector is also averse to reducing payouts to shareholders, which include the world's biggest investment and pension funds, for fear investors might take flight. Exxon Mobil and Chevron benefit from the lowest debt ratios among the oil majors while Statoil and Repsol have the highest debt burden, according to Jefferies analyst Jason Gammel.

With only a handful of major projects approved in 2015, including Shell's Appomattox development in the Gulf of Mexico and Statoil's giant $29 billion Johan Sverdrup field in the North Sea, 2016 is also likely to see few large investment decisions. Projects that could be green-lit include BP's Mad Dog Phase 2 in the Gulf of Mexico, which the company now expects to cost less than $10 billion, around half the original estimate, and Chevron's expansion of the Tengiz project in Kazakhstan, according to Gammel.

Industry-wide, costs will be cut by reducing the size of projects, renegotiating supply contracts and using less complex technology. After rapidly expanding in the first half of the decade when oil prices were above $100 a barrel, companies are now expected to focus on the most profitable activities, said Brendan Warn, oil and gas equity analyst at BMO Capital Markets.

"Companies want to reduce their range of activity and pick those with the highest returns on capital," Warn said.

Shell, which plans to complete its $54 billion acquisition of BG in February, intends to focus on the attractive liquefied natural gas (LNG) market and on deep water oil production, especially in Brazil, both areas in which BG is a leader. With similar priorities in mind, BP is increasingly focused on the Gulf of Mexico and Egypt, where it approved a $12 billion development in 2015. While tens of thousands of jobs have already been cut in 2015, more redundancies are expected this year as companies narrow their focus, Warn added.

On top of reducing spending by scrapping and delaying projects, oil majors will see costs come down as contractors agree to further price reductions. For example, the annual cost of hiring a drilling ship fell to an average of $332,000 in 2015, compared with $405,000 in 2014, according to Rigzone, which collects industry data. The drop in investment bodes badly for services and contractor companies, which are seeing their work dry up.

But with fewer projects approved, fewer fields developed and less maintenance work undertaken, companies are putting their growth at risk. Tumbling oil prices have cut billions of dollars from oil companies' revenue streams, although strong profits from refining have softened the blow for most. And while their in-house oil and gas production growth comes under pressure, companies might opt to acquire rivals with less resilient balance sheets, as with Shell's proposed acquisition of BG.
RELATED TOPICS