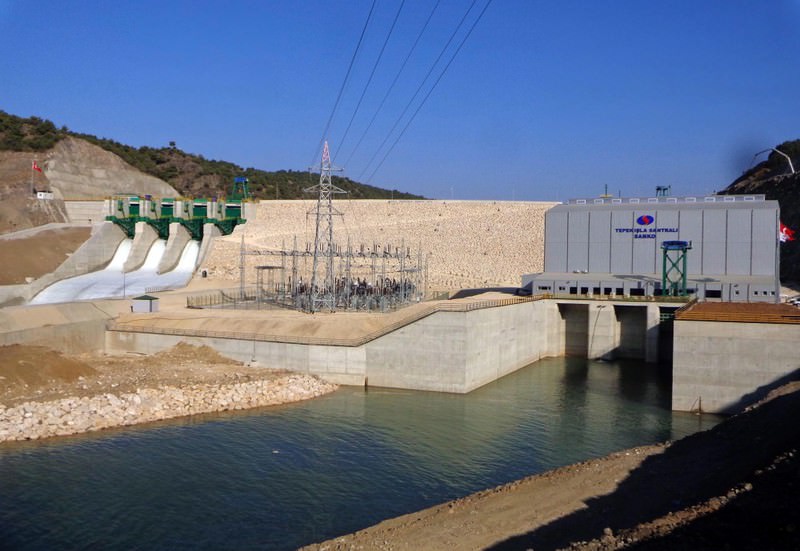 by daily sabah Jan 15, 2016 12:00 am
A total of 99 hydroelectric plants (HES) were launched Thursday with a ceremony, marking the completion of a TL 10 billion ($3.302 billion) project and generating enough energy to power a city of 2.5 million people. The plants have a total installed power of 2,194 megawatts and produce 7.4 billion kilowatt hours of energy annually. The hydroelectric plants Artvin Dam HES, Bağıştaş I Dam HES, Kayabeyi Dam and Akıncı HES, Tepekışla Dam and HES Yamanlı II HES, Düzce Aksu HES and Doğançay HES, built collaboratively by the public and private sectors, were commissioned in a formal ceremony held at the Arena Sports Hall in capital Ankara on Thursday.

These projects will contribute TL 1.1 billion to the economy, and are projected to generate 127 billion kwh of Turkey's technologically and economically ratable 180 billion kwh of hydroelectricity potential by the end of 2019.

The ceremony was attended by President Recep Tayyip Erdoğan, where the president connected to Doğançay HES via teleconference. Energy and Natural Resources Minister Berat Albayrak also attended the ceremony, where he stressed the importance of renewable energy to provide energy supply security. "These plants are crucial to reducing our energy dependency on external sources and contribute to the economy," he said.

While the private sector produced 32 percent of the electricity used in the country, now it has increased to 72 percent with the new investments. Hydroelectric plants stand as one of the most environment-friendly energy sources since they produce electricity using energy from flowing water without depleting freshwater resources.

In 2003, cooperative efforts were established between the private and public sectors in the hydroelectric industry. With the signing of the Water Usage Rights Agreement on June 26, 2003, the private sector became more involved in hydroelectricity production. While only 26 billion kwh of energy were produced in 2003, that number has increased to 91 billion kwh, a threefold increase that only accounts for 50 percent of the total ratable hydroelectric potential in Turkey. In the last 13 years, 85 percent of all commissioned plants were completed by the private sector, producing enough energy to save the country TL 11 billion in natural gas exports.
RELATED TOPICS