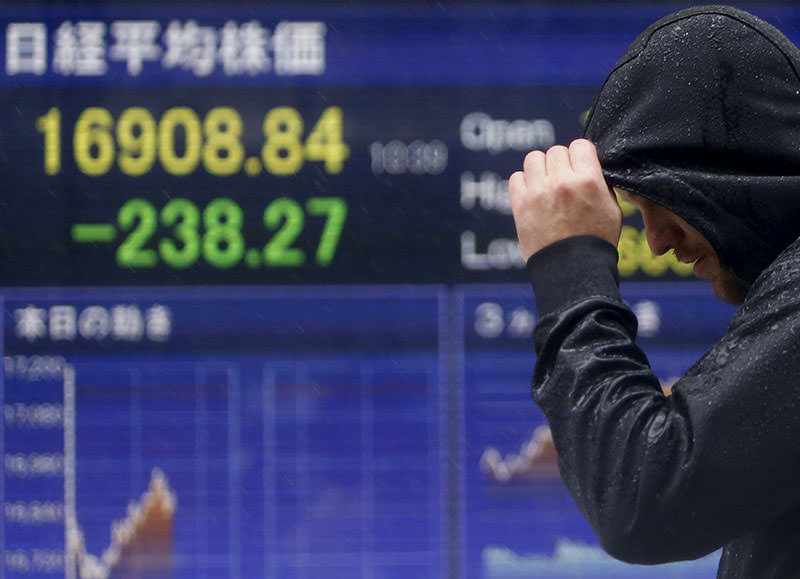 A pedestrian taking shelter from rain walks past an electronic board showing the Japan's Nikkei average outside a brokerage in Tokyo, Jan 18, 2016. (Reuters)
by French Press Agency - AFP Jan 18, 2016 12:00 am
Brent crude fell below $28 a barrel in Asia on Monday for the first time in more than 12 years on fears about a worsening supply glut after Western sanctions on Iran were lifted, allowing Tehran to resume oil exports.

Up to half a million barrels per day of Iranian crude could be added to already saturated markets after US and European leaders ended a crippling embargo put in place over Tehran's nuclear programme.

The news led to further selling of the black gold, which has fallen by about three quarters since mid-2014 owing to the supply glut, record output levels, weak demand and a slowing global economy.

"The drop was due to the Western sanctions on Iran being lifted. This means we will be seeing a bigger oil glut with Iranian crude exports coming back to the market," said Phillip Futures analyst Daniel Ang.

He said prices rebounded on some bargain-buying.

The United States and European Union lifted the sanctions on Sunday after the UN's atomic watchdog confirmed that Iran had complied with its obligations under a landmark deal in July to curb Tehran's nuclear programme.

"Iran has quite a large storage of oil at the moment. They are in a position to sell that if they choose to do so and increase supply quite quickly," Spooner told AFP.

But "they've got to get the buyers and that's one of the key questions", he said.

Ang added that Iran is likely to sell first the oil it has in its storage facilities before considering to ramp up production.

"They were telling the market that they have quite a bit in storage. Over the longer term, I don't know how much more they can produce considering prices are so low," he told AFP.

Banking group ANZ said Iran is likely to offer discounts to entice buyers, leading to "further downward pressure on prices in the near-term".

Singapore's DBS Bank said in a research note that adjusted for inflation oil is now cheaper than at any time since 1998, at the height of the Asian financial crisis.

Analysts expect supply to continue to outrun demand over the next two years, which would keep prices low.

DBS said that over the past 18 months, the United States had been responsible for more than half of supply growth. Saudi Arabia accounted for only 4.0 percent, while Iraq and Brazil contributed 38 percent.

"If supply growth were cut to zero today, demand would not catch up with supply until January 2018," DBS said.

"In the meantime, inventories would continue to grow and, at least from a fundamentals perspective, downward pressure on prices would remain."
Last Update: Jan 18, 2016 10:10 am
RELATED TOPICS