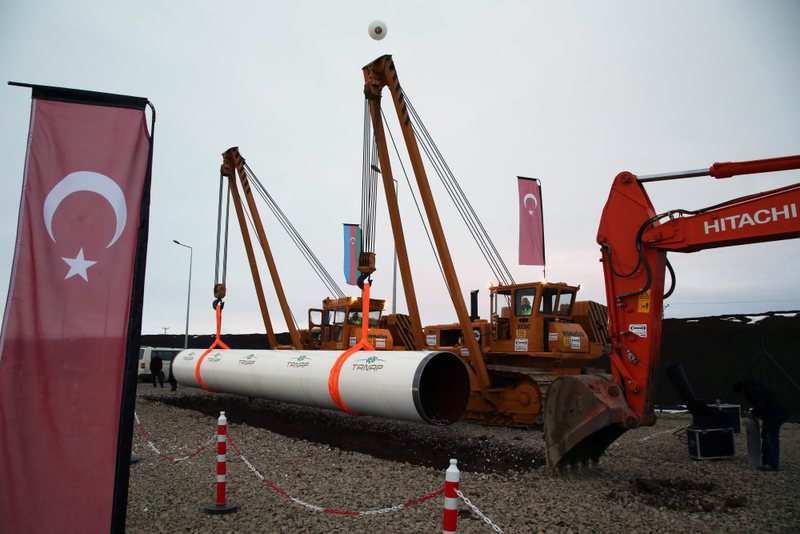 The Trans-Anatolian Natural Gas Pipeline (TANAP) will bring natural gas produced from Azerbaijan's Shah Deniz-2 gas field, and other areas of the Caspian Sea, primarily to Turkey, but also on to Europe.
by Daily Sabah with AA Feb 01, 2016 12:00 am

EU Commissioner for Energy and Climate Action Miguel Arias Canete said there will be major changes in the energy sector in the near future, adding that the energy game will completely change with Eastern Mediterranean natural gas passing through Turkey. Referring to the country as the perfect location for the creation of an energy hub in the region, Canete stated that Turkey has a very convenient position both for the purchase of liquefied natural gas (LNG) and the natural gas that flows through pipelines.

Canete paid a visit to Istanbul to attend the Turkey-EU High Level Energy Dialogue meeting. He said the meeting was very important for both sides, underlining that the EU has initiated the same high level meetings only with Norway, the U.S. and Algeria. According to Canete, all topics regarding energy were discussed during the meeting and Turkey is a very reliable partner for the EU to ensure energy supply security. He stated that Turkey and the EU face many common issues, such as the development and completion of the Southern Gas Corridor (SGC), the interconnection of electrical systems and infrastructural studies in natural gas and energy efficiency.

Underlining that the EU will continue its efforts to open the energy chapter of Turkey's EU accession process, Canete emphasized that major developments have taken place in the country since 2007, adding that "Even though there are still advances to be made in the natural gas and nuclear energy sectors, the point that Turkey has reached at this point is very conducive with the opening of the energy chapter." Canete also stated that the EU Energy Commission will initiate the process necessary for the opening of the energy chapter once political problems have been resolved. He stressed that the EU is ready to share its experiences in the nuclear sector with Turkey, where the nuclear industry is newly burgeoning. "This partnership will encapsulate all fields of energy," he stressed.

Canete said that Turkey makes use of the funds that the EU allocates for energy projects in its infrastructure projects, adding that the union can support Turkey's projects further with the funds that it allocates for innovation and technology. Highlighting that the energy dialogue was initiated to actualize cooperation in all fields, Canete stated that the energy sector will undergo major changes in the near future as explorations in the Eastern Mediterranean are extremely promising. Referring to the required political decision regarding how these energy resources will reach the markets, Canete noted that there are new, major energy supply resources.

He stressed that Turkey and the EU must work together to establish infrastructure required for the transfer of natural gas, continuing to say that Turkey will be a route for both Azeri and Turkmen natural gas, in addition to Russian natural gas that it already imports. He said, "The game will completely change with Eastern Mediterranean natural gas passing through Turkey — a perfect location for the creation of a regional energy hub."

Canete touched on Turkey's position, saying it is very convenient for the purchase of both LNG and natural gas that flows through the pipelines, saying that the European Commission (EC) supports the establishment of an energy hub in Turkey as it will help reduce prices by boosting competition. He underlined, "We foremost need liquidity in Turkey to achieve this," noting that the EU will help Turkey increase its energy storage capacity for the creation of an energy hub.

Canete stated that Turkey and the EU will improve their economies together and defined Turkey as the perfect location as a potential energy hub in terms of natural gas supply security, infrastructural development, market competition and efficiency. Canete further noted that the EU is developing a new LNG strategy for resource diversity and referred to natural gas as the cleanest fossil fuel in the international transition to clean energy.

One of these projects is the Trans-Anatolian Natural Gas Pipeline (TANAP), which will bring natural gas produced from Azerbaijan's Shah Deniz-2 gas field and other areas of the Caspian Sea primarily to Turkey and Europe. The first phase of the project is expected to be completed by 2018. The second important project is the South Caucasus Pipeline (SCP), which was built to export Shah Deniz gas from Azerbaijan to Georgia and Turkey and has been operational since 2006. Finally, the Trans Adriatic Pipeline (TAP), which connects with the Trans Anatolian Pipeline (TANAP) at the Greek-Turkish border, will cross Northern Greece, Albania and the Adriatic Sea before coming ashore in Southern Italy to connect to the Italian natural gas network. The TAP, like the TANAP, is also expected to be completed by 2018.
Last Update: Feb 01, 2016 1:12 am
RELATED TOPICS