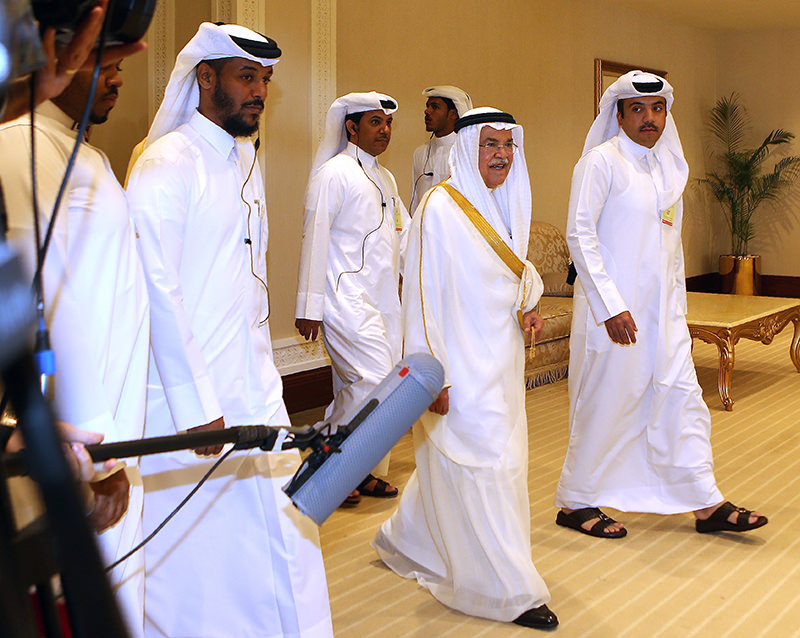 Saudi Arabia's minister of Oil and Mineral Resources Ali al-Naimi (C) arrives for the organization of Petroleum Exporting Countries (OPEC) meeting, in the Qatari capital Doha, on April 17, 2016. (AFP Photo)
by Apr 17, 2016 12:00 am

A deal to freeze oil output by OPEC and non-OPEC producers fell apart on Sunday after Saudi Arabia demanded that Iran join in despite calls on Riyadh to save the agreement and help prop up crude prices.

The development will revive oil industry fears that major producers are embarking again on a battle for market share, especially after Riyadh threatened to raise output steeply if no freeze deal were reached.

Iran is also pledging to ramp up production following the lifting of Western sanctions in January, making a compromise with Riyadh almost impossible as the two fight proxy wars in Yemen and Syria.

Some 18 oil nations, including non-OPEC Russia, gathered in the Qatari capital of Doha for what was expected to be the rubber-stamping of a deal - in the making since February - to stabilize output at January levels until October 2016.

But OPEC's de facto leader Saudi Arabia told participants it wanted all members of the Organization of the Petroleum Exporting Countries to take part in the freeze, including Iran, which was absent from the talks.

After five hours of fierce debate about the wording of a communique - including between Saudi Arabia and Russia - delegates and ministers announced no deal had been reached.

"We concluded we all need time to consult further," Qatar's energy minister Mohammed al-Sada told reporters. Several OPEC sources said if Iran agreed to join the freeze at the next OPEC meeting on June 2, talks with non-OPEC producers could resume.

The failure to reach a global deal could halt a recent recovery in oil prices.

"With no deal today, markets' confidence in OPEC's ability to achieve any sensible supply balancing act is likely to diminish and this is surely bearish for the oil markets, where prices had rallied partly on expectations of a deal," said Natixis oil analyst Abhishek Deshpande.

In December, OPEC failed to agree on output policy for the first time in years after Iran disagreed over a production ceiling proposed by Saudi Arabia, arguing again that it wanted to boost output post-sanctions.

"Without a deal, the likelihood of markets balancing is now pushed back to mid-2017. We will see a lot of speculators getting out next week," Deshpande said.

Brent oil LCOc1 has risen to nearly $45 a barrel, up 60 percent from January lows, on optimism that a deal would help ease the supply glut that has seen prices sink from levels as high as $115 hit in mid-2014.

Amrita Sen of Energy Aspects said oil prices could fall below $40 on Monday in a knee-jerk reaction.

"While today's lack of a freeze deal has no negative impact on balances - since Iran is really the only country likely to raise output substantially - it has a huge negative impact on sentiment especially as the deal had been hyped up so much," she said.

Saudi Arabia has taken a tough stance on Iran, the only major OPEC producer to refuse to participate in the freeze.

Deputy Crown Prince Mohammed bin Salman told Bloomberg that the kingdom could quickly raise production and would restrain its output only if Iran agreed to a freeze.

Iran's oil minister Bijan Zanganeh said on Saturday OPEC and non-OPEC should simply accept the reality of Iran's return to the oil market: "If Iran freezes its oil production ... it cannot benefit from the lifting of sanctions."