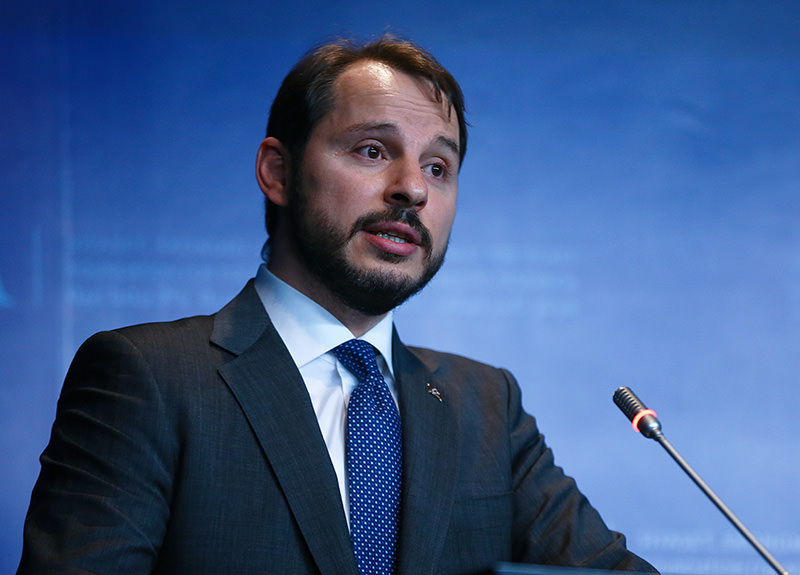 Energy Minister Berat Albayrak said Wednesday that energy security does not just cover the security of energy transmission lines and pipelines but in a broader context, also the security of the region surrounding Turkey. In a keynote speech at the conference, "Turkey's Quest to Be a Leading Country in Energy," at the Ankara-based Foundation for Political, Economic and Social Research (SETA), the minister drew attention to the fact Turkey is located in the middle of the world's largest consumers and producers of energy. He also said that the Middle East has become less and less stable since the U.S. invasion of Iraq in 2003, and that this instability has had a trickle-down effect on all sectors, causing market uncertainty and pressuring Turkey to maintain its energy security in the region.

"We have faced this challenge for the last 13 years. It started with Iraq and continued with Syria," Albayrak said, adding: "Turkey continued its stable growth and democratic development despite all external instability factors." Emphasizing that the world is currently in a period of major economic transformation, Albayrak stressed that Turkey now has to make a greater contribution to the region to maintain energy security.

"Turkey is located at the epicenter of key energy suppliers as well as major energy-consuming countries. This condition provides Turkey with a unique opportunity, and with that comes great challenges for our country. Despite all of these challenges, Turkey has proven to the world that it is a reliable energy partner," the minister said. "Turkey will continue to work for energy supply security in the future and will provide further contributions for the establishment of regional peace and security," he added.

"In the last 13 years, we have increased Turkey's installed energy capacity from 33,000 megawatts to 73,000 megawatts. We should increase the megawatt capacity in the country to at least 50,000 in the next decade," the minister added, noting that Turkey also must transform its energy infrastructure over about 30 years. Turkey also requires transforming energy infrastructure that is approximately over 30 years old in the same period.

Another speaker at the panel, British Petroleum Turkey President Bud Fackrell said that the Southern Corridor gas pipeline network is changing the energy map of this region. Fackrell said that with the completion of this project provides gas resources from the Caspian region and will start to feed to Europe for the first time, underlining that this will be "An absolute game changer."

The SETA report, "Turkey's Quest to Be a Center Country in Energy," provides a detailed account of relations between Turkey and major energy suppliers and reveals that the security of Turkey's energy supply could be strengthened by leaning on alternative energy sources from Qatar, Turkmenistan and the Iraqi Kurdistan Regional Government (KRG). According to the report, Turkey continues to cooperate in the field of energy trade with Russia, Azerbaijan and Iran.

Indicating that Iraq, Turkmenistan and eastern Mediterranean countries are currently working on serious projects for cooperative efforts regarding exports of natural resources, the report said that now Turkey's main goal is to become the "energy hub" of the region.

As part of the South Natural Gas Corridor, the report noted that TANAP would support Turkey's goals to become an energy hub. "Since the Russia crisis that emerged after the downing of an air jet, a country from which Turkey imports more than half of its natural gas, Turkey now leans towards alternative energy markets such as the KRG, Turkmenistan and Qatar to strengthen the country's security in terms of energy supply. The current world situation puts Turkey in a critical position regarding the security of supply and demand and how Turkey provides that security to its trading partners. In addition, while providing assurance of sustainability and security of energy and becoming a transit-route for countries that supply and demand energy, Turkey also needs to make progress to become an energy hub. Additionally, these situations will determine the way Turkey's energy policies take shape in the upcoming process."

Noting that Turkey shares borders with major energy sources in the region, the report emphasizes that the country is stuck in a position where it bears the cost burden of being in the region rather than benefiting from its geopolitical location.
Last Update: Apr 21, 2016 10:32 am
RELATED TOPICS