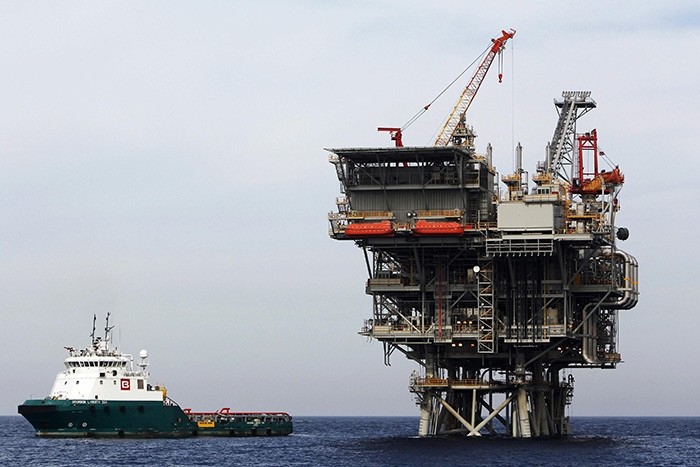 An Israeli gas platform, which produces newly discovered Israeli natural gas, is seen in the Mediterranean sea, west of the port city of Ashdod in this February 25, 2013 file picture. (Reuters Photo)
by Anadolu Agency May 27, 2016 12:00 am

Israeli Consul-General Cohen said Turkey is the best among the alternatives to carry Israel’s natural gas exports to Europe, adding that Israeli companies need to cooperate with Turkey as an energy hub in various energy projects

The only route big enough for Israel's gas exportation is a country like Turkey which is capable of providing infrastructure and further exportation to the West, said the Consul-General of Israel in Istanbul on Wednesday.

In an exclusive interview with Anadolu Agency, envoy Shai Cohen spoke about a possible gas agreement to carry Israeli gas to the European market through Turkey.

"An Israeli-Turkish deal is natural under the circumstances of the region, what is happening now in the region, our relations with our neighbors and so on. This is real politics. The situation in the region right now demands this kind of energy cooperation for Israel and Turkey," Cohen said.

Turkish and Israeli private sector companies are discussing a possible gas pipeline project between Israel and Turkey to transport natural gas supplies to Europe from the Leviathan gas field, which holds an estimated 500 billion cubic meters of gas.

"From the geopolitical point of view, without Turkey as a hub for energy sources, and especially natural gas from east to west and from north to south, it will be very difficult to really diversify and be effective in the diversification of energy resources," he said.

According to Cohen, the supply of natural gas requires adequate infrastructure. Because of Turkey's geopolitical location, it is very important that much of the natural gas transfers would be through Turkey and with Turkish involvement in infrastructure construction of pipelines and LNG stations.

Cohen added that such a project would be costly and would require the goodwill of investors, construction companies and both governments.

The pipeline infrastructure, the development of the gas fields and the pipeline to the Southern Turkish would cost about $4 billion alone, not counting further expenses which would be conducted afterwards, Cohen explained.

"I would say that there is already goodwill at least from the private sector. It is only a matter of time for us to start moving on this project. It is a matter of time because everybody understands the need," he asserted.

Israel is currently preparing the legalities to export its natural gas. However, Israel's High Court of Justice declined the government's natural gas outline agreement with energy companies in March and sent it back to the national parliament for review.

Cohen said the Israeli government submitted the new plan for energy and the development of natural gas fields which the Cabinet then approved.

"There was a Supreme Court decision a few months ago to reject the plan that was presented by the government back then. But it has been newly approved by the Cabinet, and if there is no objections and if it doesn't come again to the Supreme Court, it will be confirmed and the works will start," he explained.

"For the long run it will be beneficial because it will serve also to rebuild the confidence between both countries. In such an issue like energy it will be like a benchmark for confidence building measures for future relations," he added.

Turkey and Israel are continuing their reconciliation talks to fix bilateral relations which were strained in 2010 when Israeli commandos stormed the Mavi Marmara, a humanitarian aid ship in international waters, killing 10 Turkish activists.