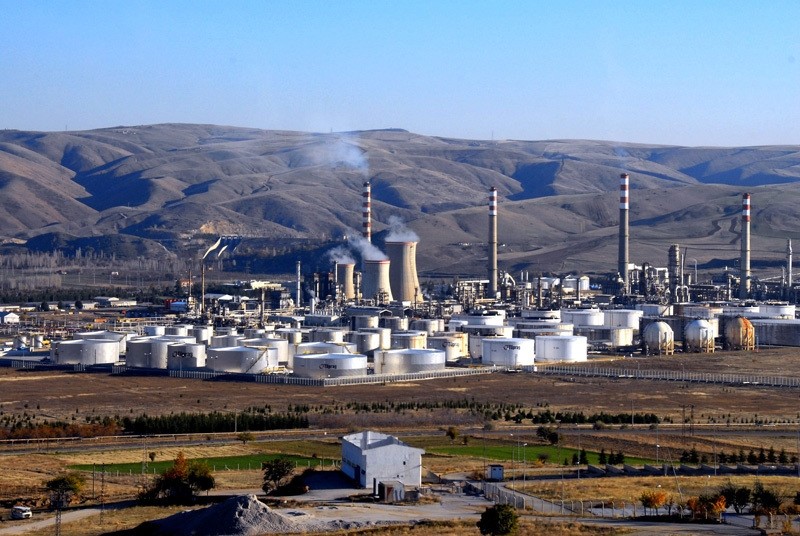 Istanbul Chamber of Industry (ICI) has recently announced the 2015 results for "Turkey's Top 500 Industrial Enterprises" study, which has determined the giants of the industry sector since 1968. TÜPRAŞ (Turkish Petroleum Refineries Co.) was revealed as Turkey's biggest industrial enterprise, with sales-from-production figure of TL 35.4 billion ($12.2 billion) in 2015 and holding this position for the last 10 year in a row.

According to the study results announced by ICI Chairman Erdal Bahçıvan at a press conference on Tuesday, TÜPRAŞ preserved their place at the top of the industry, followed by Ford Automotive with TL 14.7 billion ($5.6 billion) and Arçelik with TL 9.998 billion ($3.44 billion). The top three corporations on the list belong to Koç Group holdings.

The study reveals the current situation and problems of the real economy. Announced two months earlier than last year, one of the most specific outcomes of the study was that financing costs had increased by 75 percent compared to last year. This means industrialists lost 63.4 percent of their profits as financing costs.

According to ICI research, Turkey's manufacturing industry growth was under the national economic average over the last four years, with the exception of 2014. In 2015, the Turkish economy grew four percent while the manufacturing industry's growth was 3.8 percent. In the same year, ICI 500 companies' exports decreased 12.9 percent, from $61.3 billion to $53.4 billion.

Stating that the study revealed the abnormal increase in the financing costs in 2015, ICI Chairman Erdal Bahçıvan said the majority of operating profits that the industrialists had realized with great efforts went to financing costs.

According to Bahçıvan, financing costs increased by 75.1 percent compared to 2014. Industrialists lost TL 28 billion ($9.65 billion) out of TL 44 billion ($15.16 billion) in profit, or 63.4 percent, due to financing costs. This percentage is 16 percent on average for public industrial enterprises around the world. In other words, the thing that makes Turkey different from the rest of the world is not the percentage of indebtedness, but the cost of the loans. Nearly two-thirds of revenue, which industrialists earn by great efforts, research and development and investments and by creating employment and taking risks, goes to finance. Bahçıvan indicated that this was an unacceptable and unsustainable situation and it was impossible for the Turkish finance system to continue like this. He added that while industrialists struggled with such financial burdens, the important financial institutions were also unhappy, and the wheels of industry did not seem to be spinning healthily.

Stating that Turkey's growth should be backed by research and development as well as high technology, Bahçıvan said: "SMEs, which we will encourage to produce high value-added productions, will help Turkey's qualified growth with their dynamism."