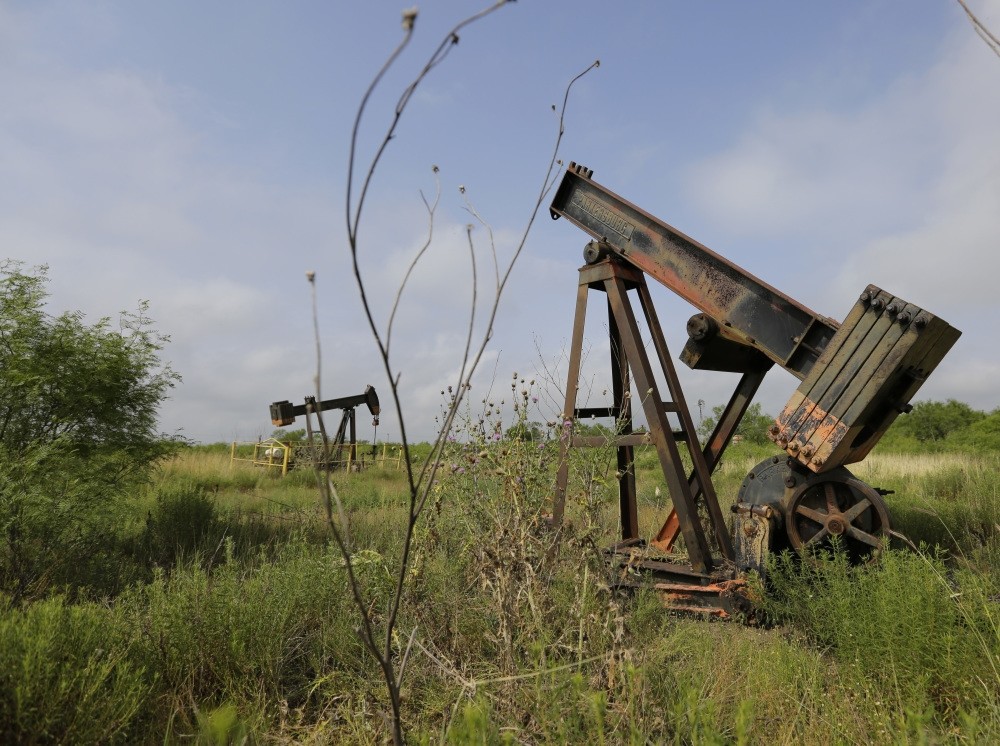 Pumps sit idle on a South Texas ranch. Deserted drilling wells are the relics of every oil bust, and Texas is pitted with more than any other place in the U.S.
by Associated Press Jun 21, 2016 12:00 am

As U.S. rig counts plunge to historic lows, and with at least 60 oil producers declaring bankruptcy since 2014, energy-producing states are confronting both holes in their budgets and potentially leaking ones in the ground. In Texas alone, the roughly $165 million price tag of plugging nearly 10,000 abandoned wells is double the entire budget of the agency that regulates the industry.

The problem is forcing states to get creative: Texas regulators now want taxpayers to cover more of the clean-up, supplementing industry payments. Wyoming and Louisiana are riling drillers with steeper fees. Oklahoma is reshuffling money among agencies in the face of a $1.1 billion state budget shortfall, while regulators also grapple with earthquakes linked to oil and gas activities.

"As downturns go, this one happened faster and accelerated. It moved downward faster than the big downturn we had in the '80s," said John Graves, a Houston oil consultant. "For some people in our industry, it's been more intense." Crude prices that peaked above $100 a barrel in 2014 plunged by 60 percent in just six months.

But these responses -if they even wind up working -are still years from meeting the growing backlog of untended wells. Texas officials predict the number of orphaned wells could soar to 12,000, which would be nearly 25 percent more than what regulators can't keep up with now. Landowners, meanwhile, are growing restless with abandoned pump jacks and damage while drillers warn that crackdowns would only put them out of business faster at a time when oil has finally crept from below $30 a barrel to about $50.

"It's the magnitude because this bust is so deep. In Wyoming they had a single operator walk away, and instead of it being 5, 10, 20 wells, it was 150," said Bruce Baizel, who monitors oil and gas regulators for the environmental group Earthworks. "It's not the small, marginal operators. You're starting to get into some medium-sized independents walking away from things."

Orphaned wells are potential environmental hazards below ground as well as rusted-out eyesores above. A 2011 report by the multistate Ground Water Protection Council found at least 30 cases of groundwater contamination in Texas caused by orphan wells between 1993 and 2008. In the Bigfoot Field south of San Antonio, tall stalks of weedy thistle surround dormant wellheads, some stained with crude or leaking fluids. State regulators place a higher priority on bigger hazards.

The problem is not new. Energy-rich states had thousands of orphaned wells on the books for decades, particularly in Texas, where the backlog exceeded 25,000 in the early 2000s before landowners pressured lawmakers to light a fire under state regulators. Landowners are getting antsy again, as the state's Republican comptroller, Glenn Hegar, has predicted that a third of oil producers in Texas will go bankrupt this summer.

"These landowners are chained to a corpse," said Trey Scott, a managing partner of Trinity Mineral Management, which represents landowners who own thousands of acres in the Texas oil patch. With the state facing an average cost of $17,000 per well, Scott said, "If you have those wells, your chances of getting them plugged are slim to none."
RELATED TOPICS