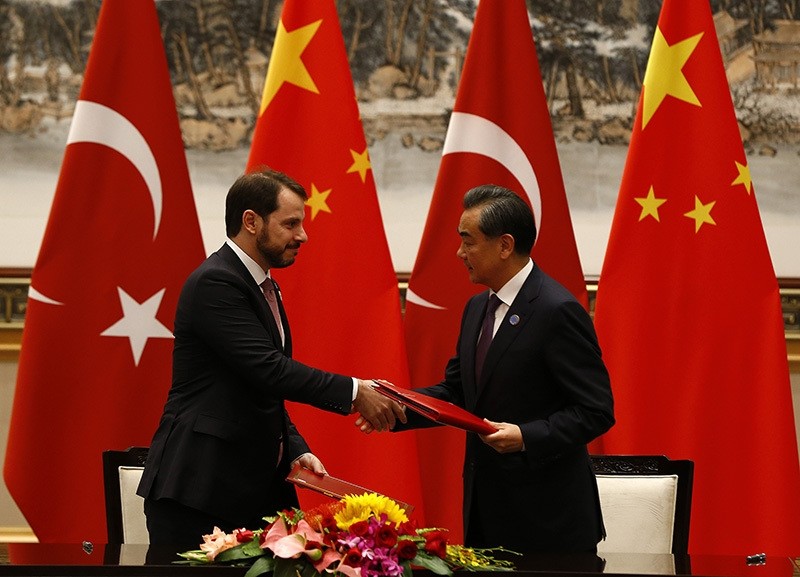 Saying that he is hopeful about the future of bilateral relations, Xi agreed to accelerate the studies of the Intergovernmental Cooperation Council which has been established for the improvement of bilateral relations. The council consists of deputy prime ministers from Turkey and vice presidents from China.

The two leaders agreed to further improve relations in the fields of trade, transport, energy and tourism, highlighting that Turkey and China share the same sentiments when it comes to carrying out joint studies on the actualization of the G20 agenda.

Albayrak said that those who want to prevent Turkey from producing nuclear energy even though it has been used in the world for 60 years are on a slippery slope, adding that the location of Turkey's third nuclear power plant will soon be announced.

According to Turkish Habertürk daily, Albayrak, who is also the president of the Joint Turkey-China Economic Commission, also signed cooperation agreements on nuclear energy, renewable energy and coal-based power plants. Through these agreements, China has taken one more step toward undertaking the third nuclear power plant project in Turkey. As is known, a Chinese-American consortium is willing to undertake the project.

Albayrak shared information about agreements, saying that there is an anti-nuclear energy lobby in Turkey. Stressing that Turkey has dreamed of producing nuclear energy since 1956, Albayrak stated, "However, [those dreams] got stuck in phases related to the economy, politics and bureaucracy until the Justice and Development Party (AK Party) rule. There is a great resistance to nuclear energy. No matter what different lobbyists say, Turkey must have nuclear energy."

According to Albayrak, Turkey pays attention to avoid constructing the third nuclear power plant near fault lines, military zones and water lines. All proper options will be addressed to make a strategic decision on the location through a high-level consultation.

Stressing that Turkey aims to produce 120,000 to 150,000 megawatts of installed power between 2023 and 2030, Albayrak said some 10,000 to 15,000 megawatts of this power will be produced by nuclear power plants. He stated Turkey does not want to lose time in nuclear energy, adding that they will sing a memorandum of understanding with Japan on the acceleration of the construction of the second nuclear power plant. Meanwhile, a Russian Rosatom State Atomic Energy Corporation (Rosatom) team will visit Turkey to accelerate the Akkuyu nuclear power plant project which is experiencing a significant slowdown.

Pointing to the importance of creating uranium infrastructure in nuclear energy, Albayrak said, "There is a reserve of 5,000 to 6,000 of uranium, which we call yellow cake, in Sorgun, Yozgat." Currently, the uranium field is being operated by a foreign company. If Turkey can switch to nuclear technology, it will be using its existing natural resource infrastructure. Turkey can import this technology, establish beneficiation infrastructure or make joint investments with other countries to use their refinery infrastructure.

Albayrak said they aim to soon actualize the project which will connect Beijing to London. As part of steps taken with respect to renewable energy, Turkey plans to initiate two bids on solar and wind energy by the end of the year. Underlining that they aim to pave the way for domestic research and development (R&D) activities, Albayrak noted that they will develop a model which will encourage investors to carry out domestic production and make R&D investments in Turkey.