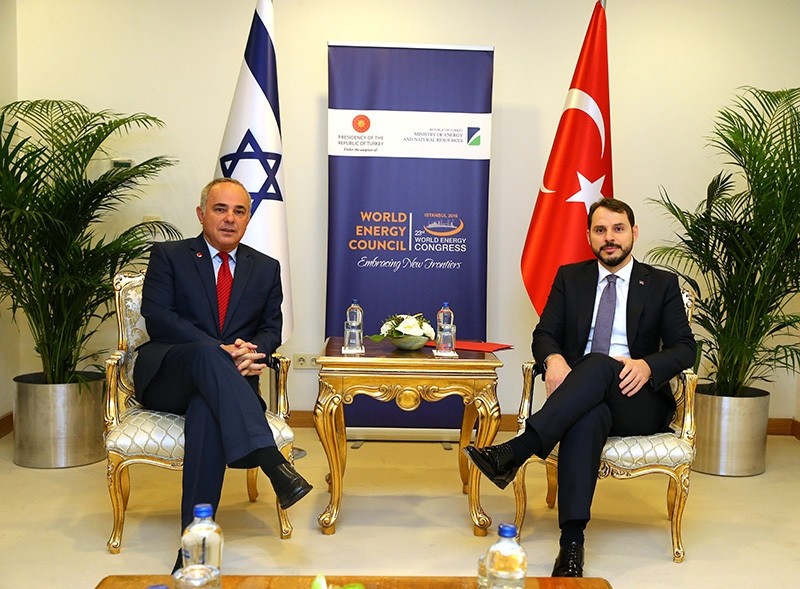 After attending the 23rd World Energy Congress in Istanbul, which marked the first ministerial-level visit since the raiding of a Turkish flotilla in international waters in 2010, Steinitz said that Turkey and Israel plan to enhance cooperation in the energy field. "Turkey and Israel will examine the feasibility of building a gas pipeline,'' he said.

Minister Steinitz noted that his meeting with Turkey's Energy and Natural Resources Minister Berat Albayrak marked an important moment in the normalization of relations between the two countries. "I am one of the greatest supporters for normalization of relations," the Israeli minister said. "This is a token of the normalization process that has just started between our two states, Turkey and Israel. I came here on behalf of the Israeli government and people. I am confident that most people are eager to see peace and stability in the region and good relations and economic cooperation between Turkey and Israel."

Steinitz stated that Israel has other options for energy but Turkey remains an important option. "Of course, we are considering also exporting natural gas to other countries like Jordan which we signed a contract with. Egypt, which also has a pipeline going through Cyprus to Greece will be considered, but the Turkish option is very significant," he said.

Israel is seeking ways to reach the European market, which is the biggest in terms of natural gas consumption. The idea seems to be in alignment with Europe's interest, since supply security and diversification of sources top their agenda. Israel can also export its natural gas to Europe via Cyprus and Egypt. However, this option requires establishing liquefied natural gas facilities at a high cost. Turkey, therefore, seems the most advantageous and safest route.

"We would like to consider exporting gas both to our neighboring countries, Jordan and Egypt, or to Europe through different pipelines,"Steinitz said, adding, "one of the very important options is connecting Europe through Turkey."

The Embassy of Israel in the Turkish capital Ankara released a joint statement after the press conference held by Steinitz. The embassy office underlined that this was the first official ministerial meeting between the two countries since the recent normalization of bilateral relations.

"The ministers welcomed the normalization of ties and expressed their commitment to casting substance into the relations, for the benefit of both peoples. The ministers stressed the centrality of economic cooperation in relations, and in particular, the potential of the energy sector. They discussed in detail the option of exporting natural gas from Israel to Turkey and agreed to establish a dialogue on this issue," the statement said, adding, "Both ministers expressed their views, stressing the role of the energy sector in the stability and prosperity of the Eastern Mediterranean basin."

Improving the lives of Palestinians

The Israeli minister also noted that Israel welcomes all initiatives from Turkey to improve the living conditions of the people in Gaza. "In our meeting, we also spoke about Gaza and providing energy and electricity for Palestinians in Gaza and the West Bank," Steinitz added. He highlighted that Israel will do everything that it can to assist Turkey to provide help for Gaza. "Of course, we are very careful to maintain our security. Improving the lives of ordinary people in Gaza is not against our interest," he added.

Later in the day, Turkey's presidential spokesperson İbrahim Kalın said Turkey will continue to work providing electricity and water to Palestinians. The Energy and Natural Resources Ministry sent a delegation to Gaza to carry out fieldwork to help satisfy Gaza's electricity requirements. Turkey will carry out simultaneous works in three areas in light of the report to be prepared by the delegation.

A floating power plant to be established at the Gaza port is one of the emergency projects. Projects leading to the production of solar and other energy will also be addressed. Gaza's electricity transmission infrastructure will be re-established by installing transformers, high and low voltage lines and the re-planning of distribution lines to provide electricity to all houses and streets. Private sector representatives with broad experience in production, transmission and distribution are helping take responsibility for Gaza's reconstruction.

Relations between Turkey and Israel came to a halt in 2010 following an Israeli naval raid on Turkish aid ship Mavi Marmara, en route to deliver humanitarian aid to the blockaded Gaza Strip. The raid killed 10 people.

The Israeli government took a step toward reconciliation on March 24, 2013, when Israeli Prime Minister Benjamin Netanyahu, under the encouragement of U.S. President Barack Obama, apologized for the mishandling of the raid during a conference call with then Prime Minister Recep Tayyip Erdoğan. Israel also agreed to pay compensation to the families of the victims.

Having reached a consensus on lifting the Gaza blockade, Israel and Turkey signed a deal. This means Israeli soldiers are exempt from legal and criminal responsibility and individual Israeli nationals are also not held criminally or financially liable for the incident.