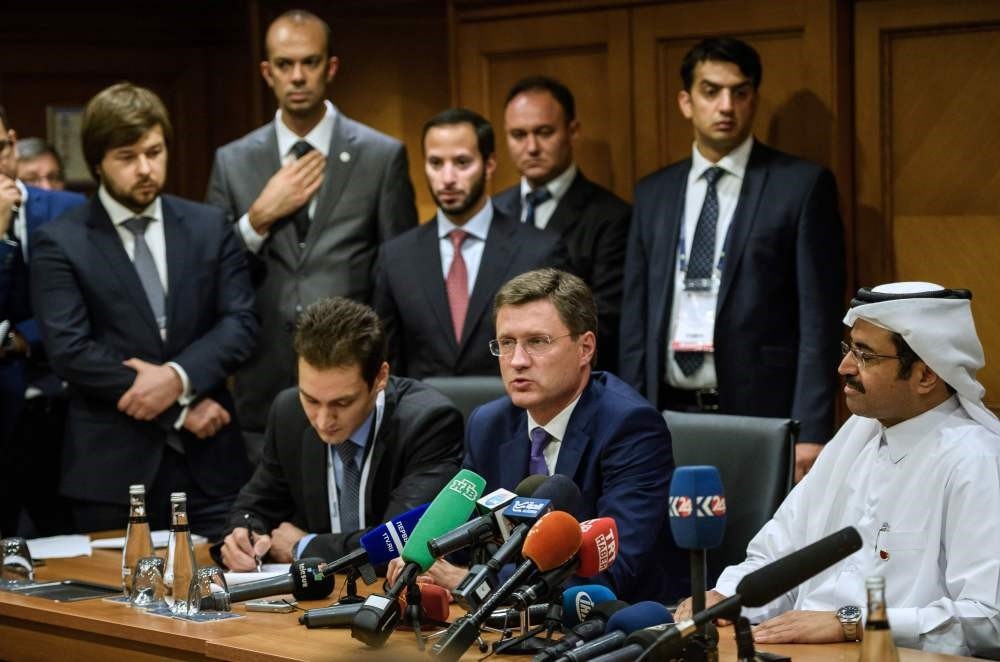 Russian Energy Minister Alexander Novak (C) speaks next to Mohammed bin Saleh al-Sada (R), President of OPEC and Qataru2019s Energy Minister during a press conference at the 23rd World Energy Congress in Istanbul Wednesday.
by Oct 13, 2016 12:00 am
OPEC said Wednesday it was inviting Russia and other key non-members to a meeting later this month as the oil cartel and Moscow seek to tighten cooperation to boost historically low crude prices. The announcement came after a meeting in Istanbul between several top OPEC energy ministers with their Russian counterpart Alexander Novak aimed at advancing joint efforts to bolster oil prices that have hurt the economies of crude producers.

The meeting took place on the sidelines of the World Energy Congress in Istanbul, which on Monday saw a vow by Russian President Vladimir Putin for Moscow to impose curbs on energy output to match OPEC cuts.

"We agreed to have a technical meeting of OPEC... on 28-29 of this month [October]. An invitation is going to be sent to some key non-OPEC countries," Qatar Energy Minister Mohammed Saleh al-Sada said after the talks. "This meeting is meant to give a better understanding of the best way of how to move towards the rebalancing of the market to the interest of all - not only producers and exporters but also the world economy," added the Qatari minister.

The prospect of Russia, one of the world's top two oil producers alongside Saudi Arabia, coordinating policy with OPEC has boosted global oil markets in the last few days and briefly brought crude to its highest levels for a year.

Novak confirmed that Russia had been invited to the October meeting in Vienna which would try and "work out a roadmap for the cooperation of our countries" in the rebalancing of prices. He praised the discussions in Istanbul as "constructive" and discussed also "mechanisms" of cooperation between OPEC and non-OPEC countries. Novak had on Tuesday evoked a possible six month freeze of production levels by Russia to match OPEC's own output curbs. He said that no concrete figures were discussed at the meeting. "As for figures, that is in the future and I think [at the October meeting] we will discuss more or less concrete parameters."

However there were notable absentees from the talks, with the energy minister of the cartel's kingpin Saudi Arabia, Khalid al-Falih, already having departed from Istanbul and Iraq and Iran also not attending.

Barkindo had applauded Tuesday the tighter cooperation between Russia and the cartel, which last month at a meeting in Algiers agreed its first production cut in eight years. "We have restored the broad consensus among all producers," he said. But al-Falih had also made clear at the congress earlier in the week that Saudi Arabia was against any drastic output cuts by OPEC to squeeze supply and bolster prices. "OPEC should make sure not to crimp too tightly and create a shock to the market."
RELATED TOPICS